A Man Won Gold in Women’s Cycling (Again). When Will We Say ‘No More’? 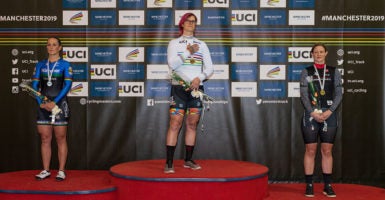 For the second year in a row, a biological male has won a women’s cycling championship.

Rachel McKinnon, who was born male and identifies as a transgender woman, won the Masters Track Cycling World Championships in the female 35-39 sprint category last weekend in Manchester, England.

The 37-year-old Canadian, who transitioned from male to female around age 29, set a new world best time, beating American Dawn Orwick for the gold.

The win has caused considerable controversy among other female athletes and observers who note the obvious unfairness of a biological male competing against women. McKinnon’s bodily advantages defeat the purpose of sex-segregated sports and nullify the hard work and training of female cyclists.

This isn’t the first time McKinnon has faced criticism. The athlete’s success in the same race last year caused a similar outcry. It’s no wonder a second win, in the same race, has sparked yet another. Women are realizing this isn’t a one-off event, but the beginning of a trend.

According to an interview with VeloNews, McKinnon has always competed with women, meaning no one will ever know for sure how he would have performed against other biological men.

McKinnon has gone so far as to say science doesn’t show testosterone gives men a competitive advantage over women. But that’s simply false.

The International Association of Athletics Federations recently recognized this fact by restricting the testosterone levels allowed for transgender female athletes (that is, biological males competing with women).

Obviously, it has put some stock in the concept that testosterone does boost athletic performance, or it wouldn’t limit it.

Even still, let’s posit testosterone is irrelevant, that it’s not the factor that gives men an unfair advantage over women. There are other physiological differences men enjoy that enable them to achieve physical feats that women can’t.

For example, men have a slimmer pelvis (known as the “Q angle”), larger hearts, larger lungs, and a larger skeletal mass—all significant differences that can aid in a sport like cycling. Biological males even have more muscle mass, which tends to make them stronger and faster.

“A man’s leg is about 80% muscle, compared with about 60% muscle in a woman’s leg,” Dr. Emily Kraus, a sports medicine physician, explained. She added that “men’s muscles tend to have larger fast-twitch muscle fibers, which help with sprinting.”

Science supports what most people intuitively understand: that men and women are physiologically different. Those differences give men certain advantages over women. Anyone who accepts sex segregation in sports understands this, and it’s why many women are outraged at biological men moving into women’s sports.

In 2018, when American cyclist Jennifer Wagner finished third against McKinnon in the Masters Track Cycling World Championships (McKinnon came in first), Wagner complained that the race was unfair.

Our culture faces a serious deficit when a biological man beats women in a women’s athletic event, then berates others as “transphobic” for failing to applaud his victory.

Imagine being a woman who has trained for years—maybe longer—to master a specific sport, only to lose to a biological male who may be an average athlete when compared to his male peers.

It’s at this point that transgender “rights” bump up against women’s rights. There’s no getting around it: The right of a biological man to compete in women’s sports is, in principle, an infringement upon women’s rights.

Until society realizes this and stands up for women, expect more female athletes to be robbed of the gold medals they deserved.