These Bad Laws Are Perpetuating Waste and Abuse in Local Government 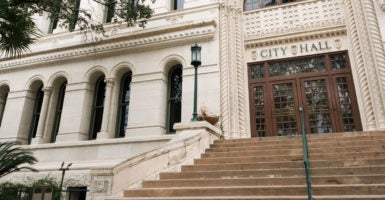 Since the 1980s, Congress and the states have expanded the scope of civil forfeiture laws, giving more leeway to law enforcement in seizing assets they believe may have been used in a crime. (Photo: iStock Photos)

Robert Ordway is a member of the Young Leader's Program at The Heritage Foundation.

A federal audit by the Department of Justice inspector general has revealed that the Franklin County, New York, district attorney’s office misused or mishandled $454,673 in equitable funds over a five-year period.

The report is yet more evidence that civil forfeiture laws are too easily abused and in serious need of reform.

Forfeiture laws empower the authorities to seize property if they suspect that it was used to commit a crime, or represents illegal proceeds. The tool existed in the earliest days of the country, though you would hardly recognize it.

Back then, forfeiture was limited to enforcing customs laws and seizing pirate ships. We live in a very different world today.

Since the 1980s, Congress and the states have expanded the scope of forfeiture to include over 400 federal statutes and countless state laws, and the most common use of forfeiture is to seize small amounts of cash as alleged drug money.

Most law enforcement agencies are able to keep the proceeds from successful seizures and spend the money with little oversight. That perverse financial incentive encourages officers to seize property even on flimsy evidence, knowing there is little accountability and equally little chance that a property owner could successfully challenge the seizure.

The federal government, meanwhile, operates the Equitable Sharing Program, in which it divides federal forfeiture proceeds with state and local agencies that collaborate with the feds in seizure actions and investigations. State and local recipients of equitable sharing funds must use the money only for law enforcement purposes, and agree to abide by rules spelled out in the “Guide to Equitable Sharing.”

This last point is crucial. State and local legislatures have no ability to oversee how these funds are spent. The federal rulebook is the only meaningful accountability mechanism in place, and in the case of the Franklin County DA, the inspector general’s report found that “the District Attorney’s Office was aware of the Guide, [but] failed to adhere to it.”

The result, according to the audit: The DA’s office subjected “the equitable sharing funds to fraud, waste, and abuse.”

The Justice Department audit specifically examined records from fiscal years 2011 through 2015, during which the county received federal payouts totaling $604,649, and spent $802,196.

During this period, the inspector general found conclusive evidence that the DA’s office neither applied “countywide [accounting, banking, and procurement] controls nor did it abide by the Guide in its management of the equitable sharing funding we audited.”

Instead, the Franklin County DA’s office “circumvented” county rules and played fast and loose with hundreds of thousands of dollars.

Take, for example, the DA’s approach to financing drug buys.

Federal rules mandate that buy money come from appropriated budgets. Equitable sharing funds can only be used to reimburse jurisdictions for the cost of drug buys, but cannot pay for them directly.

Nevertheless, the DA’s office spent $60,000 in forfeiture funds directly on drug buys. Even worse, it paid this money “via check, which investigators cashed themselves” and kept in bank bags until needed for a drug buy.

There “was no system of records to identify or track” the money once it was doled out, making it impossible for auditors to verify that the money was indeed used as claimed.

The DA also used forfeiture funds to pay an investigator $43,851 in overtime based on “self-generated and self-certified” overtime vouchers, and despite county rules expressly barring employees “from working and receiving overtime.”

One cannot help but be reminded of Sunrise, Florida, which a 2014 inspector general audit took to task for using equitable sharing funds to pay more than $1 million in overtime to a small number of officers working forfeiture cases.

Then there is the matter of nearly $111,000 used to buy supplies and equipment, paid directly to vendors and circumventing county procurement requirements. The process was so shoddily managed that “Franklin County could not demonstrate that the amount paid for the supplies and equipment was reasonable.”

An additional $45,061 went to cover telephone lines, the majority of which the audit found to be no longer needed for investigations, and surveillance cameras placed throughout the community that the DA could not even locate.

The DA’s office even used $55,717 to cover expenses posted to an unauthorized credit card, keeping few, if any, receipts or invoices. As a result, the inspector general could not determine whether the expenses were “permissible use[s] of equitable sharing funds.”

The inspector general noted that then-DA Derek Champagne maintained that, in his view, equitable sharing funds were exclusively within the jurisdiction of his office, and that he did not need to comply with even basic auditing and accounting requirements mandated by Franklin County.

The inspector general strongly disputed this claim, and with good reason: If the former DA wants to advocate even less oversight and accountability than the already lax federal guidelines, he ought to have a better record to stand on.

The inspector general’s report concludes with a series of recommendations to reform the practices of the Franklin County DA’s office, including the return of more than $455,000 in misused or mishandled funds.

While that certainly appears to be called for in this case, more needs to be done. So long as federal law permits equitable sharing payments to continue, abuses like those attested to in Franklin County will arise from time to time.

This audit is a case study in the problems brought on by a lack of transparency, oversight, and accountability in government. It is clear evidence that it is time to reform civil asset forfeiture and to consider ending the equitable sharing program.