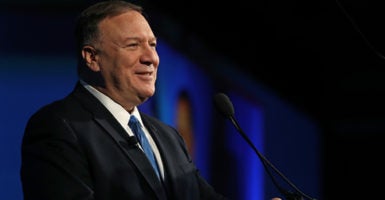 "When you see Venezuela get on the Human Rights Council at the U.N., it cries out for a fundamental reexamination of these first principles," Secretary of State Mike Pompeo says Tuesday at a Heritage Foundation gathering in Washington. (Photo: Mark Wilson/Getty Images)

“When I came to the State Department, it became very clear to me—I had seen this in my time in Congress too—people throw around the word ‘rights’ an awful lot and bad actors around the world couch their tragic behavior, their evil behavior, in the language of rights,” Pompeo said, speaking to an audience at The Heritage Foundation’s annual President’s Club gathering in Washington.

The secretary of state later added: “When you see Venezuela get on the Human Rights Council at the U.N., it cries out for a fundamental reexamination of these first principles.”

The State Department’s commission is set to examine these basic questions:

Shortly after the July announcement, a letter to Pompeo objecting to the purpose of the commission was signed by 400 liberal groups and current and former elected officials.

“We urge you to immediately disband this body, and to focus your personal attention on the significant challenges currently facing the protection of human rights globally,” they wrote.

“There will be those who just think we are all wet. So be it,” Pompeo said Tuesday. “We’ll have a good, candid discussion. But the idea is to take and reground the rights that we talk about in the traditions of America, what was in our Declaration of Independence and our Constitution, and to take another look at that.”

We all know that [U.N.] human rights declaration back [in] 1948, the State Department was very involved in that. We want to go lay down with clarity not only what human rights are, [what] these fundamental rights are, but from what it is they are derived, how we got there. Because we think that is very important to understand as well, and put out a document we think will be a true marker for the world to talk about human rights in the right way.

The State Department’s new commission will include scholars from around the globe and across the political spectrum, Pompeo said.

“It’s about understanding first principles in a way that is consistent with the American tradition,” he said.

The Trump administration has made international human rights a priority, Pompeo said, but joked that you won’t see that reported on MSNBC.

Beyond the moral aspect, Pompeo said, America has a “selfish strategic interest” in promoting religious liberty and human rights.

That’s because of the correlation with stability, the secretary of state said. Nations that respect the individual autonomy of every citizen are reliable allies.

Still, Pompeo noted that 80% of the people in the world live in places that either have restrictions on religion or no religious freedom at all.

“It’s about creating a catalog so that the world will know what is taking place,” Pompeo said, adding: