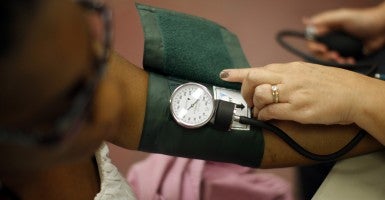 For the third year in a row, a majority of Americans say it’s not the proper role of government to make sure everyone has health care coverage.

According to a new Gallup poll, 52 percent of respondents said it is not the responsibility of the federal government to make sure all Americans have health care coverage, while 45 percent responded that it is. Gallup has asked Americans this question every year since 2000 in its annual poll. In 2000, 59 percent of Americans said it was the federal government’s responsibility to provide health care, and the majority increased to 69 percent in 2006. But since 2012, the majority has opposed the idea that health care coverage is the government’s responsibility.

According to Gallup, “seven in 10 Democrats and Democratic leaners agree that providing healthcare coverage to all is the federal government’s job; three-quarters of Republicans and Republican leaners disagree.”

The poll was conducted via telephone interviews, Nov. 6-9, 2014. It surveyed a random sample of 828 voting-age adults in all 50 states and Washington, D.C. It has a margin of error of plus-or-minus 4 percentage points.