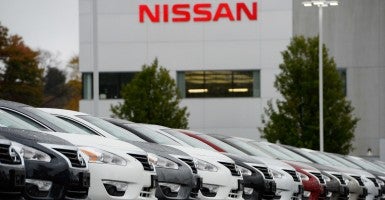 One would think it wouldn’t be too difficult to attract private financing or self-finance with that kind of stature in the market.

Yet, the Department of Energy conditionally approved a $259 million taxpayer-backed loan, announcing it Thursday.

That was the wrong decision to make. In addition to risking taxpayer dollars by directing investments to politicallypreferred technologies, government meddling in financial markets also harms the economy.

Rather than trying to improve upon the Energy Department loan and loan guarantee programs, policymakers should eliminate them.

The Alcoa loan is part of the Energy Department’s Advanced Technology Vehicles Manufacturing program. The department has awarded five companies with loans, including two that the agency discontinued. The program’s biggest black eye is Fisker Automotive, an electric vehicle company that received a $529 million loan in April 2010 but declared bankruptcy just three years later. The Vehicle Production Group, which made handicap accessible taxi cabs, has also gone under. The two largest loans in the program went to well-established companies: Ford and Nissan.

The adverse economic impacts are not just about putting taxpayer dollars at risk, although, as we’ve seen with defunct companies like Solyndra and Fisker, massive amounts of taxpayer dollars can be lost in these schemes.

Whether a company that receives a Department of Energy loan is profitable or not, the program is misguided because it skews the rules of free enterprise. Federal loans and loan guarantees promote cronyism that rewards political connectedness over market viability.

The number of investment opportunities is broad and expansive, but the capital to finance them is not. This requires that choices be made among the different investments. Through a number of mechanisms, including grants, loans, loan guarantees, mandates and targeted tax credits, the federal government clouds these decisions. Government spending and financing programs essentially pull capital out of those limited reserves and dictate who should receive it.

Perhaps if the Energy Department had never given Solyndra or Fisker loans, private investors wouldn’t have backed these failed companies or diverted investments elsewhere. That is a large part of the problem with these programs. Private investors use government-backed loans and loan guarantees as a way to substantially reduce their risk. Even if there’s a chance the project may be an economic loser, the private investor has less skin in the game. It would be like if your friends had a NCAA college bracket pool with a $100 buy-in. Maybe that’s too steep for you to enter but the government comes in and says it’ll pitch in $60. If you win, you can pay the government back but if you lose, you lose less and the taxpayers bear a portion of the loss. The distortion of risk calculation made by private investors is a huge problem with government intervention into capital markets.

Futher, because capital is in limited supply, a dollar loaned to government-backed projects will not be available for some other (possibly more viable) project. This means that the companies that drive innovation and bring new services and technologies into the marketplace may not get support, while companies with strong political connections or those that produce something politicians find appealing will get support.

Market-viable technologies should not need financial support from the taxpayer. Companies should seek private financing if they believe the technology is worth the risk.

When government awards taxpayer-backed loans to well-established companies, the federal government is providing nothing more than corporate welfare. Congress needs to get the government out of playing investment banker altogether.