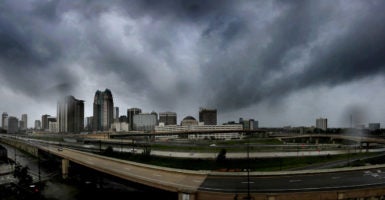 Storm clouds move in over the skyline of downtown Orlando as Hurricane Irma makes its way up the Florida Peninsula, Sept. 10, 2017. (Photo: Joe Burbank/TNS/Newscom)

Taking lessons learned from hurricane-heavy 2017, the plan laid out FEMA’s three main goals for the future: building a culture of preparedness, readying the nation for catastrophic disasters, and reducing the complexity of FEMA.

For far too long, FEMA has been running from state to state putting out the fires of various disasters while neglecting measures that would help prepare for disasters and even prevent them. So it is encouraging that FEMA’s plan stresses the importance of mitigating the effects of disasters by being proactive.

Congress has a role in bringing about these proactive policies. Here are three steps it should take.

People living in high-risk areas need to have flood insurance, but the federally-run National Flood Insurance Program is the wrong tool to use.

This program subsidizes flood insurance by providing coverage below the actuarially fair rate, thereby encouraging people to build their homes and businesses in flood-prone areas. This results in more people living in harm’s way and makes large-scale disaster more costly.

Rather than expand the flood insurance program as FEMA has suggested, Congress should retire it and allow the private sector to provide. Private-sector insurance would set prices according to a region’s risk level, thereby discouraging development in high-risk flood zones.

By putting an increasing number of Americans at risk, the National Flood Insurance Program makes Americans less prepared for disaster. Getting rid of the program is a good first step toward increasing preparedness.

Following the passage of the Stafford Act in 1988, the number of federal disaster declarations has steadily increased. There are two stipulations in the law that are to blame.

First, the law requires the federal government to cover at least 75 percent of disaster response costs. As a result, states are incentivized to request federal aid whenever they can.

This has created a vicious cycle as states respond to increased federalization of disasters by preparing less and setting less funding aside. As a result, states are less prepared for disasters, and they request more government help, and the cycle is perpetuated.

Secondly, the law’s definition of a disaster worthy of federal aid is so vague that even local disasters that are centered in one state and cost as little as $1 million can be considered federal disasters. The high volume of declared disasters strains the time and resources of FEMA, leaving it less prepared to handle truly catastrophic disasters.

To remedy these issues, Congress should amend the Stafford Act by reducing the federal-state cost share. Moreover, the threshold for receiving FEMA aid should be increased. These actions would incentivize states to proactively prepare for disasters.

When it comes to rescue and rebuilding efforts following a disaster, efficiency is key. Unfortunately, a number of legal requirements make disaster response slower and more expensive than it should be.

One such requirement is found in the Jones Act. Passed in 1920, this law allows only U.S.-built and crewed vessels to ship goods between two American ports. This rule has raised the price of shipping between U.S. ports and drastically limited the number of vessels available, creating an especially serious problem during emergency situations when supplies need to be transported quickly to disaster zones.

This was made painfully evident in Puerto Rico following Hurricane Maria.

Other regulations, such as certificate-of-need laws, the Foreign Dredge Act of 1906, and prohibitions on 33-foot trailers, likewise become obstacles during crisis situations. In order to ensure efficient recoveries following disasters, these cumbersome and outdated laws need to be fixed.

FEMA is right to make preparedness a priority. It’s now time for Congress to take the actions necessary to allow this to happen.