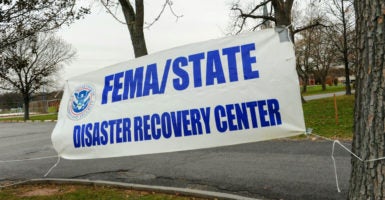 An outdoor sign marks the location of a FEMA center during a nor'easter in Staten Island, New York. (Photo: Stephanie Keith/Polaris/Newscom)

As winter storms spread across the Midwest and Northeast this week, many Americans prepared for the worst by stocking up on necessities.

But what about the Federal Emergency Management Agency or state and local governments? Are they prepared for the worst?

Sadly, the answer appears to be no.

Prior to 1988 and the passage of the Stafford Act, state and local governments were responsible for responding to nearly all disasters while FEMA only declared an average of 28 disasters per year.

Today, FEMA finds itself responding to a disaster every three days or so, with disaster declarations per year often reaching the hundreds.

This drastic increase in the amount of disasters FEMA must respond to has resulted in problems for both federal and state governments.

Under the Stafford Act, if the president declares a disaster worthy of federal assistance, the federal government will cover at least 75 percent of disaster response costs. This has resulted in states requesting federal assistance for smaller-scale disasters that were once covered by state governments, so as to bring in federal dollars.

The increasing dependence of states on the federal government to respond to disasters has thus caused unpreparedness within the states. The vague wording of the Stafford Act requires disasters to be “of such severity and magnitude that effective response is beyond the capabilities of the state and the affected local governments and the federal assistance is necessary.”

Simply put, states are being incentivized not to prepare for disasters so that federal funding can be made available.

The current cost of damage threshold that states must meet to receive assistance from FEMA is extremely low. Storm-related damages must only top approximately $1.43 per capita, which for low population states amounts to less than or close to $1 million.

By making FEMA responsible for small-scale disasters, it is left unprepared in both readiness and money for catastrophic disasters.

Reforming FEMA and returning responsibility of smaller disasters to state and local governments is one way to save money and allow the federal government to prepare for large-scale disasters.

>>>For more on how Congress can reform FEMA, see David Inserra’s report.

By increasing the threshold to $3 per capita in damages with a $5 million minimum threshold, the federal government will be able to save money and return responsibility for local disasters back to the states where it belongs.

This will also make states more prepared should a larger disaster hit. FEMA might still need to be called in, but the state will have more resources ready to deploy.

Changing the percentage of federal assistance granted for disasters will also encourage states to be more prepared for localized disasters while keeping FEMA’s resources ready to handle a massive disaster.

So as Americans prepare for snowstorms, hurricanes, and other serious weather events, Congress should make sure the government is also prepared for the worst by reforming FEMA and the Stafford Act.