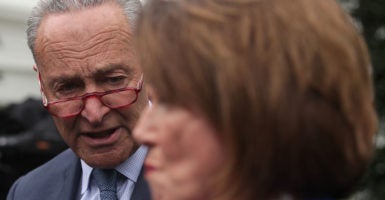 Senate Democrats are trying to chip away at critical elements of the 2017 tax cuts.

Included in the 2017 tax cuts is the new $10,000 cap on the state and local tax (SALT) deduction, one of the reform’s signature achievements. The cap advanced the bipartisan goal of treating taxpayers across the income scale more fairly by diminishing the previously unlimited subsidy for high-income taxpayers in high-tax states.

The Senate is set to vote to overturn regulations that are necessary to implement the cap according to congressional intent. Overturning the regulations could increase the deficit by more $673 billion over 10 years and encourage high-income taxpayers to avoid taxes and make a profit in the process.

The SALT cap was part of the most sweeping update to the U.S. tax code in more than 30 years, which cut taxes and has allowed the American economy to continue its longest economic expansion in recorded history. Undermining the SALT cap would begin to chip away at the core achievements of the 2017 Tax Cuts and Jobs Act.

Senators may be motivated by two misconceptions about the SALT deduction and the implementing regulations.

Before the 2017 tax cut capped the SALT deduction, 70% of taxpayers received no benefit from it. Most of the benefits flowed to wealthy taxpayers in high-tax states.

Despite the SALT cap, the vast majority of taxpayers still got a big tax cut for three reasons.

First, the tax law doubled the standard deduction, which means that about half of the people who previously chose to itemize their taxes (which allows access to the SALT write-off) now voluntarily choose to take the new larger standard deduction. Most of these people are better off than they were before.

Second, tax rates were lowered across the board. Even if taxable income increased slightly because of the SALT cap, lower tax rates mean most people still came out ahead.

Third, because the tax law raised the exemption for the ineffective and overly complicated alternative minimum tax (AMT), millions of higher-income AMT-paying taxpayers saw the SALT deduction increase from zero to $10,000 under the new law because they no longer have to pay the AMT. Taxpayers subject to the AMT are not allowed to take the SALT deduction.

If repealing the regulations make the SALT cap unenforceable, it could reduce revenues by $673 billion over 10 years and would primarily benefit wealthy taxpayers at the expense of other taxpayers.

It would further generate larger deficits and a faster-growing national debt, slowing economic growth, which will hurt lower-income earners through reduced opportunity the most.

To implement the SALT cap as intended by Congress, the Treasury Department wrote regulations to disallow the use of new state tax credit schemes set up to game the charitable deduction and circumvent the SALT cap.

These new programs would allow savvy taxpayers to artificially recharacterize their state taxes as charitable donations, which are not subject to the $10,000 cap.

Existing legitimate state-based tax credit-supported charities for education choice, environmental protection, and research got unintentionally caught up in the first round of regulations.

These organizations can offer a state-provided offsetting tax credit for donations, in effect allowing taxpayers to direct their money to private charity rather than the government alternatives.

The glitch in the proposed regulations limited the ability to donate for about 10% of taxpayers—those who chose to itemize but didn’t max out their SALT deduction.

In the final regulations, Treasury fixed the problem they caused and reestablished the federal tax system’s neutrality toward state tax credit programs. Donors who receive an offsetting state tax credit for contributions to charitable organizations are not subject to new regulatory limits on the federal SALT deduction, up to the cap of $10,000.

The regulations also ended the ability for some taxpayers to actually come out ahead or in one sense “make money” when they donated to tax credit organizations. This was a very limited problem before 2017, but the new SALT cap without the appropriate implementing regulations made the problem much worse.

By receiving a 100% tax credit for state taxes paid and a federal charitable deduction, a taxpayer could potentially donate $1,000 and receive $1,370 in federal and state tax savings. The current regulations prohibit the unintentional $370 of such federal tax planning strategies.

Whether the charity is legitimate or not, the tax code should not allow someone to make a profit by donating to a charity.

Repealing the regulations would not only give wealthy Americans a large and unfair subsidy for their state taxes, but the move would cut their taxes by even more than the pre-2017 law.