The Deep State Plot Against Trump 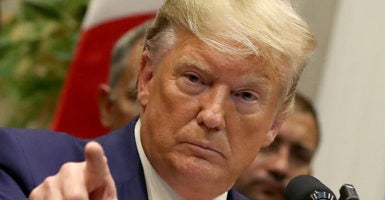 President Donald Trump speaks during an event where U.S.-Japan trade agreements were signed at the White House on Oct. 7, 2019, in Washington. (Photo: Mark Wilson/Getty Images)

As a nation we marveled at Dr. Martin Luther King’s moral reasoning; it helped overcome a deep sense of inertia among the largely conservative civil rights establishment that favored incrementalism rather than rebellion.

King countered that the system of oppression was so entrenched in American society that no legal action would effectively challenge its injustice. As a result, he adopted a radical new strategy—nonviolent disobedience.

His reasoning was based, not in man’s law, but a higher one: “Just as it is wrong to use immoral means to attain moral ends,” he said in his letter from a Birmingham jail, “it is just as wrong, or perhaps even more so, to use moral means to preserve immoral ends.”

Impeachment furor has reached a feverish pitch in both the news media and on Capitol Hill. Several congressional inquiries, mostly stemming from the Democratic Party, into Trump have gathered momentum.

Many of the so-called “revelations” and “allegations” used as justification for these inquiries have emerged from anonymous sources and so-called whistleblowers within the administration and the intelligence community.

The timing seems a tad suspicious.

This latest controversy comes on the heels of Trump’s firing former national security adviser John Bolton and Trump’s holding firm in his decision to withdraw all American troops from Syria.

On the other hand, Trump’s personal peccadilloes and petty offenses seem to be just that—a petty justification for removing the president by the extreme measure of impeachment.

The likely reason for such unified rancor is perhaps that Trump’s foreign policy “infractions” have riled an especially entrenched set of interests within America’s military and its intelligence communities. It is telling, perhaps, that the mainstream media, which constantly hounded President George W. Bush’s administration over its wars, seems to take particular umbrage at Trump’s efforts to extract America from that very trap.

The fever pitch over Trump’s unorthodoxy has reached such a crescendo that normally staid, middle-of-the-road Republicans, including Rudy Giuliani and former House Intelligence Chairman Devin Nunes, have taken to defending our president by casually evoking the darkly conspiratorial “deep state.”

No one knows who the members of this “deep state” shadow organization are for sure, and no one is naming names. Regardless, it seems to hound the president at every turn.

Doesn’t this lament seem somewhat incongruous coming from a political party that controls half of Congress, the White House, and has appointed a majority of the Supreme Court? How is it that the president’s camp can wield such potent levers of political power and at the same time consider itself besieged by shadowy players?

The answer is more banal than nefarious. The “deep state” is hiding in plain sight. It is not a clandestine group, rather it’s is a prevailing attitude.

Many of our citizens and our institutions have adopted incrementalism as a lingua franca. The same inertia that caused civil rights leaders oppose to King’s radical new approach to leading social change also opposes Trump’s efforts to almost singlehandedly transform the American geopolitical framework.

Interests currently invested in continued militarism, lax immigration, unfair trade, and unchecked indebtedness fear that Trump’s new direction will starve them of wealth and influence. To a certain extent that is true.  Charting a new course might force painful realignments around values and priorities, but it ultimately bends the United States in the right direction.

Two distinct and interrelated aspects of U.S. policy under Trump seem to have particularly irritated the ruling cabal. They are our longstanding strategic alliance with Israel and our economic dependence on the Gulf oil trade. Both attachments have driven us down a sordid rabbit hole of war, debt, and injustice that has cost us more than is returned.

In the course of global enforcement, we damaged ourselves, not to mention the millions of citizens of the Middle East who continue to suffer amidst these seemingly endless wars.

President George Washington, on the eve of his retirement, warned against this very situation. He said, “nothing is more essential than that permanent, inveterate antipathies against particular nations, and passionate attachments for others, should be excluded. … The nation which indulges towards another a habitual hatred or a habitual fondness is in some degree a slave. It is a slave to its animosity or to its affection, either of which is sufficient to lead it astray from its duty and its interest.”

We can no longer afford to police the Middle East; and we will not be drawn into ridiculous internecine battles among the region’s various religious sects, merely to preserve claim over the Gulf’s energy.

In extricating America from needless attachments—both antipathies and alliances—Trump seems to be keeping his promise to place first his duty to America’s direct interests above all others.

The very fact that entrenched interests are so hell-bent on stopping Trump demonstrates just how pernicious our attachments have become. Whether by intraparty infiltration and rebellion or though partisan coup by the Democrats, we even betray our allegiance to power over populace.

The serious constitutional crimes alleged against the president deserve to be placed in context. Without context, text alone is sometimes considered pretext.

The Democrats already got a bite at the apple with the lengthy Mueller investigation; it was fully investigated and reported with not a single significant finding against Trump. Now they are trying their hand at unseating Trump through an impeachment investigation that seems oddly disruptive given the proximity of an election that could easily decide it all.