After Agent’s Death, Trump Declares US ‘Must Build the Wall!’ 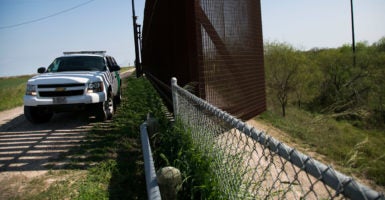 President Donald Trump is renewing his demand that Congress fund a wall on the southern border after a U.S. Border Patrol agent was killed from injuries inccurred while working over the weekend in southwest Texas, while his partner was injured.

“Border Patrol officer killed at southern border, another badly hurt,” the president said in a tweet. “We will seek out and bring to justice those responsible. We will, and must, build the wall!”

Border Patrol Officer killed at Southern Border, another badly hurt. We will seek out and bring to justice those responsible. We will, and must, build the Wall!

The cause of death is not known. Jeanette Harper, with the FBI’s El Paso, Texas, office told the San Antonio Express-News: “They were not fired upon. There are so many different agencies working together that we need to come together and develop a timeline.”

CBP tells us Agent Martinez’ hometown was El Paso. He was 36 and entered on duty with the Border Patrol on 8/12/2013. pic.twitter.com/f9p1jzO7wW

Agent Martinez was responding to activity while on patrol with another agent, who was also seriously injured. We are fully supporting the ongoing investigation to determine the cause of this tragic event. On behalf of the quarter of a million frontline officers and agents of DHS, my thoughts and prayers go out to the family and friends of Agent Martinez and to the agent who is in serious condition.

Our prayers are with the families of this Border Patrol Agent who was killed & the other who was injured in this attack in Texas. Our resources must be increased to prevent these attacks in the future. #txlege #tcot https://t.co/60tHfoWKRq