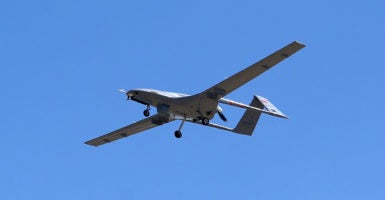 There’s a lot of hand-wringing going on in defense circles across the globe over the increasing challenge of armed drones and cruise missiles, especially after the strike on Saudi oil facilities and oil fields earlier this month.

The fact is that defending against these modern weapon systems can be tough—and the failure to be able to defend against them can be quite consequential.

While it’s unclear exactly what happened in the attack at this point in the now international investigation, one thing seems clear: The armed drones and cruise missiles hit their marks unscathed.

How could that be, considering well-armed Saudi Arabia has a number of air and missile defense systems available to it to defend against armed drones and cruise missiles?

There are a lot of factors at play here, but one of the obvious challenges to successfully defending against the threat of armed drones and cruise missiles—regardless of who launches them—is the limitations on radars.

Cruise missiles and drones have some distinct advantages that make them uniquely appealing to military planners—and, in some cases, such as the attack on the Saudis, a weapon of choice.

Second, these weapons systems, which are often smaller in size than larger conventional aircraft or ballistic missiles, are harder for radar systems to detect due to their smaller radar cross-section.

Third, cruise missiles and armed drones are often mobile, meaning the threat can come from any number of directions. Indeed, cruise missiles can be launched from the ground, from aircraft, and from ships and submerged submarines.

If radar isn’t pointed in the right direction at the right time, you won’t see the attack coming.

They can be shot down.

Indeed, the Saudis claim to have shot down a number of armed drones (and seemingly, ballistic missiles) of the Iranian-backed Houthi rebels, launched into Saudi Arabia from Yemen during the ongoing conflict.

It’s possible that Saudi air defense radars may well have been looking to the south toward Yemen, where the drone and missile threat was well-known—and not to the north toward the Persian Gulf, from which an attack wasn’t expected.

Armed drones and cruise missiles can effectively and efficiently augment a country’s air power and military might, and diversify the threat a potential opponent must defend against. The attack on the Saudis will only make these weapons systems more popular.

Without question, now would be a very good time for the U.S. to take stock of our armed drone and cruise missile defenses.