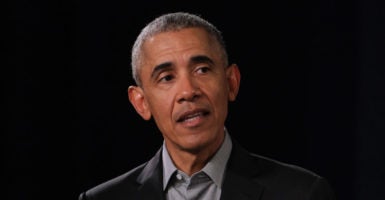 “One challenge will define the future for today’s young generation more dramatically than any other: Climate change," former President Barack Obama recently tweeted. Pictured: Obama speaks to young leaders from across Europe in a town hall-styled session on April 6, 2019, in Berlin. (Photo: Sean Gallup/Getty Images)

This week, complaining was the order of the day.

The complaining was largely done by enthusiastic minors, to the raucous applause of Democratic politicians and the media.

Greta Thunberg, a 16-year-old activist from Sweden, appeared before a U.N. climate summit to chide the adults in catastrophic terms usually reserved for bad B-disaster flicks: “You have stolen my dreams and my childhood with your empty words. … We are at the beginning of a mass extinction, and all you can talk about is money and fairy tales of eternal economic growth. How dare you?”

One student intoned at a weekend rally, “All of our futures are in jeopardy.” Another student said, “We will be the last generation to survive.”

This, of course, is nonsense. We will not be the last generation to survive. The world will keep on spinning. The damage from climate change is uncertain—it may be moderate, and it may be graver. But to suggest, as ralliers did, that the world will end without ACTION! (no specific action recommended) is factually untrue.

All of this “activism” prompted former President Barack Obama to tweet his kudos: “One challenge will define the future for today’s young generation more dramatically than any other: Climate change. The millions of young people worldwide who’ve organized and joined today’s #ClimateStrike demand action to protect our planet, and they deserve it.”

What action, precisely? And why is the left so keen on rallying behind children to push its cause, the same way it did with regard to gun control in the aftermath of the Parkland shooting?

Perhaps it’s because we don’t expect children to have solutions. After all, they’re children. But adults hiding behind children to avoid the difficult conversations that must take place about how to achieve solutions is nothing other than moral cowardice.

At the same time leftist politicians were rooting on these children, commending them for their exuberance, the United Nations was accomplishing nothing on the issue of climate change. That’s because the lead emitters on planet Earth aren’t in the West. They’re in China and India. And as The New York Times reported, “despite the protests in the streets, China on Monday made no new promises to take stronger climate action.”

It turns out that complaining without solutions isn’t actually useful—at least if you’re interested in solving problems. It’s political pandering, designed to make solutions more difficult by adding moral condemnation to political infeasibility. That merely frustrates people with the “system,” since such pandering falsely suggests that at the heart of the problem lies cruel apathy—and apathy directed at crying children—rather than serious political gridlock. It’s divisive, rather than unifying, and polarizing, rather than practical.

But perhaps that’s the point, at least for the adults who take advantage of children to hide behind their own unwillingness to acknowledge the difficult realities of solution-making.