Venezuela Is Still Carrying Out Chavez’s Strategy to Poison America. But Trump Can Stop It. 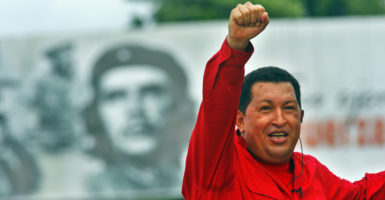 Venezuela continues to go down the drain.

As the world wonders how thuggish Venezuelan President Nicolás Maduro manages to cling to power, we received a fresh reminder that the problems plaguing Venezuelans started long before him.

It was Hugo Chávez, Maduro’s predecessor and mentor, who set Venezuela on the road to ruin almost two decades ago.

We have also learned that, as part of that journey, Chávez initiated a campaign to flood the United States with cocaine. That’s just one more reason why the Trump administration must keep pressing to rid the Western Hemisphere of Chavismo.

U.S. federal prosecutors have claimed that, shortly before his death from cancer, Chávez directed his top lieutenants to work in tandem with the Revolutionary Armed Forces of Colombia to weaken the U.S. via an epidemic of drugs.

With Chávez’s backing, the guerillas became a major producer of hard drugs, distributing them to Latin American cartels and splitting the profits with el presidente and his cronies.

Chávez’s handpicked successor, Maduro, inherited his criminal enterprise as well as the presidency. Today, it’s not just the support of China, Russia, Iran, and Cuba that keeps Maduro in power—it’s his criminal network and the cash it provides.

There is little doubt that the unholy alliance between the Venezuelan regime and the Revolutionary Armed Forces of Colombia is still in operation.

Recently, guerrilla commander Luciano Marin—a key figure in the peace talks with Colombia—renounced the peace deal he helped broker and declared he was taking up arms again.

Guess where he has been operating. If you said “Venezuela,” go to the head of the class. Maduro has declared that Marin and another guerrilla commander were “leaders of peace who would be welcomed in Venezuela.”

The documents filed by federal prosecutors were not public before this month. But the Trump administration has long labeled Maduro a de facto drug lord. One of the officials cited by prosecutors, Diosdado Cabello, was already under sanctions for trafficking and money laundering.

And it is not just the U.S. that suffers from the regime’s drug war on us. Colombia, Panama, and several Caribbean states have to deal with the debilitating influence of criminal cartels—their violence, mayhem, and corrupting riches.

Meanwhile, the entire region struggles under the responsibility of caring for the millions of Venezuelans who have fled from Maduro’s despotic and economically ruinous rule.

Maduro has dug in deeper than an Alabama tick, but that shouldn’t deter the U.S. from continuing its campaign to isolate, punish, and hopefully convince the strongman to finally let go and let the people of Venezuela have a future.

When Ambassador John Bolton left as national security adviser, many assumed the administration’s interest in the people of Venezuela would go with him.

That is unlikely to happen. Bolton may have pressed too hard and been too optimistic over how quickly the regime could be brought to heel.

Still, over the last two years, the U.S. has worked with a coalition of nations in the region who see clearly the dangers posed by the Maduro regime. It is important to keep that coalition together.

Only in partnership with these friends and allies can the continent banish the drug cartels, master migration issues, deal with dangerous transnational terrorists groups such as Hezbollah, promote economic freedom and regional growth, empower women, and keep destabilizing actors—including China, Russia, Iran, and Cuba—at bay.

The good guys of the Western Hemisphere can start by banding together at the United Nations General Assembly and making it clear that they won’t stand for this kind of bad behavior anymore.

They could begin by protesting the very idea that the illegitimate Venezuelan regime should stand for election to the Human Rights Council. In fact, it is an embarrassment that Maduro’s people are recognized at all at the U.N.