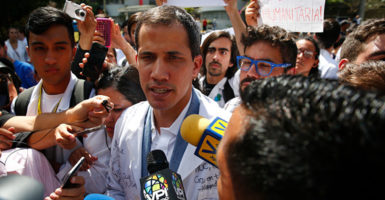 President Donald Trump spoke Wednesday with the man the U.S. government recognizes as the legitimate leader of Venezuela even as turmoil continues in the oil-rich socialist country.

About 50 countries have joined the United States in recognizing opposition leader Juan Guaido as acting president of the South American nation while Venezuela’s dictator, Nicolas Maduro, tries to cling to power.

Maduro, who has the and military behind him, announced he was cutting off diplomatic relations with the United States, but the Trump administration has said key diplomats will remain in Venezuela and deal with the new government.

Interim President Guaido thanked President Trump for the United States’ commitment to freedom and prosperity in Venezuela and the region, and noted the importance of the large protests across Venezuela against former dictator Maduro, set to occur today and Saturday. They agreed to maintain regular communication to support Venezuela’s path back to stability, and to rebuild the bilateral relationship between the United States and Venezuela.

Guaido’s life is in danger from the Maduro regime, which is why Trump’s call sent an important message, said Ana Quintana, senior policy analyst for Latin America and the Western Hemisphere at The Heritage Foundation.

“The Maduro regime does not operate like a government, but as a crime syndicate, with bankers and companies and pieces that have to fit together,” Quintana told The Daily Signal.

That’s why the Trump administration’s sanctions could be effective in pressuring Maduro to step down, she said, though it’s not a certainty.

“The noose is tightening and tightening, and we are watching history in the making,” Quintana said. “But, for anyone who tells you Maduro is done, keep in mind that Cuba’s regime has survived for 60 years.”

The administration anticipates the sanctions will block about $7 billion in assets and $11 billion in exports over the next year.

“PDVSA has long been a vehicle for embezzlement, for corruption for Venezuelan officials and businessmen,” Treasury Secretary Steven Mnuchin said during the announcement Monday at the White House. “Today’s designation of PDVSA will help prevent further diversion of Venezuela’s assets by Maduro, and will preserve these assets for the people of Venezuela where they belong.”

Mnuchin predicted the oil sanctions would have minimal impact for Americans at the gas pump.

“There’s been a big reduction in the overall price of oil and particularly since we instituted the Iran sanctions,” the treasury secretary said. “I think you know we’ve been very careful in making sure that these costs don’t impact the American consumer. Gas prices are almost as low as they’ve been in a very long period of time. These refineries impact a specific part of the country, and … we’re very comfortable that they have enough supply that we don’t expect any big impact in the short term.”

The National Assembly invoked Article 233 of the country’s constitution to declare Maduro illegitimate, and Guaido, as head of the elected assembly, filled the voice.

Maduro began his second term in January after a disputed election fraught with allegations of fraud. After the election, large crowds gathered in Caracas, the Venezuelan capital, waving flags and chanting, “Get out, Maduro!”

Maduro was part of the government of the late dictator Hugo Chavez, whom he succeeded after Chavez’s death in early 2013.

Among other countries joining the United States in recognizing the new government under Guaido are Canada, Argentina, Brazil, Colombia, Spain, Germany, France, and Britain.

However, authoritarian and dictatorial governments are backing Maduro’s leadership, among them China, Iran, Syria, Cuba, Turkey, and Russia.

Maduro presided over Venezuela’s hyperinflation, which is predicted to reach 10 million percent this year. The economy has prompted 3 million Venezuelans to flee the country.