Bolton: US Has ‘Special Responsibility’ to Constitutional Government in Venezuela 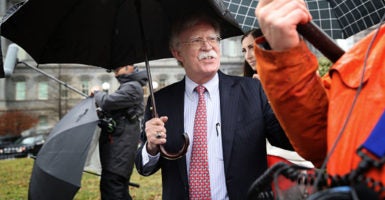 The United States is working to support what national security adviser John Bolton called the “constitutional government” in Venezuela, as two men are laying competing claims to the presidency of the South American nation.

Socialist dictator Nicolas Maduro is trying to hold onto power after the United States recognized opposition leader Juan Guaido’s claim to the presidency. Maduro subsequently broke off diplomatic relations with the United States.

“What we’re focusing on today is disconnecting the illegitimate Maduro regime from the source of its revenues,” Bolton told reporters Thursday. “We think, consistent with our recognition of Juan Guaido as the constitutional interim president of Venezuela, that those revenues should go to the legitimate government.”

Bolton was referring to U.S. dollars going into the country.

Asked why the United States is taking more action against the dictatorship in Venezuela than against other authoritarian governments, Bolton said the country is of concern because of its proximity.

“The fact is, Venezuela is in our hemisphere,” he said. “I think we have a special responsibility here, and I think the president feels very strongly about it.”

Canada; some Latin American countries, including Argentina, Brazil, and Colombia; and some European allies joined the United States in recognizing Guaido as the legitimate leader of the oil-rich country.

A German government spokesman tweeted about his government’s support for a new regime in Venezuela. “The Venezuelan people are courageously committed to a free future for the country. This requires a political process that leads to free and credible elections. The democratically elected National Assembly has a special role to play here,” Steffen Seibert tweeted.


“We’re speaking with governments in this hemisphere, which have overwhelmingly recognized the new constitutional government,” Bolton added. “We’re talking to our colleagues in Europe and elsewhere to demonstrate widespread political support for the interim presidency, and we’re moving to do everything we can to strengthen this new, legitimate representative government.”

Maduro began his second term this month after a disputed presidential election fraught with allegations of fraud. After the election, large crowds gathered in Caracas, the Venezuelan capital, waving flags and chanting, “Get out, Maduro!”

Maduro was part of the government of the late dictator Hugo Chavez, whom he succeeded after Chavez’s death in early 2013.

In a speech Thursday, Maduro was defiant.

“Don’t trust the gringos,” Maduro said of the United States. “They don’t have friends or loyalists. They only have interests, guts, and the ambition to take Venezuela’s oil, gas, and gold.”

The State Department has said it would not remove its diplomats from the country within 72 hours, as Maduro has demanded.

Other authoritarian and dictatorial governments are backing Maduro’s leadership, among them China, Iran, Syria, Cuba, Turkey, and Russia.

“The vice president spoke to him the evening before the recognition statement made by the president, and others are speaking with him as well, through our embassy in Caracas,” Bolton said.

“Our personnel, we’re still there. They’ve been invited to stay by the legitimate government, consistent with their safety. That’s our intention, but we’re working, really, around the clock here to do what we can to strengthen the new government,” he said.