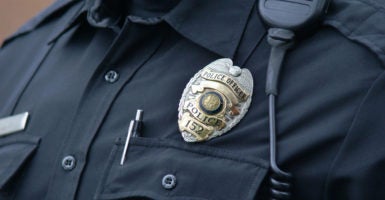 When a person who cannot read, write, and compute very well takes a written employment exam, including that to become a police officer, he is going to encounter difficulties. His difficulties are not caused by any racially discriminatory aspect of the test. (Photo: Getty Images)

The U.S. Department of Justice has recently sued the Baltimore County government alleging that its written test for police officer recruits was unfairly biased against black applicants.

It turns out that black applicants failed the written test at a rate much greater than white applicants. That results in fewer blacks being trained and hired as police officers.

John A. Olszewski Jr., Baltimore County executive, said: “A law enforcement agency should look like the community it serves. As I have said repeatedly since taking office, I am committed to increasing diversity in the county’s police department.”

Baltimore City uses the Municipal Police Selection Test. You can examine some sample questions at its website. I’d like to know which of the questions are either unrelated to police work or racist.

Many jurisdictions use The National Police Officer Selection Test. You can examine some of the sample questions at its website. Again, I’d like to know which of the questions are unrelated to police work or are racially biased questions.

In addition, it has been found that MPST and POST are successful predictors of law enforcement training success and job performance.

Black performance on police exams is simply the tip of the iceberg of a truly tragic cruelty.

That cruelty stands front and center when one examines the education that most blacks in Baltimore receive.

A high school diploma attests that the holder can read, write, and compute at a 12th-grade level. Obviously, the diplomas conferred on students who have not mastered reading, writing, and computing are fraudulent.

When a person who cannot read, write, and compute very well takes a written employment exam, including that to become a police officer, he is going to encounter difficulties. His difficulties are not caused by any racially discriminatory aspect of the test. His difficulties are a result of not having acquired what he should have acquired by the time he finished high school.

But that is not how such a person sees it. He sees that he has a high school diploma just as a white applicant has a high school diploma. To him, any difference in treatment and outcomes must be the result of racial discrimination. Thus, the U.S. Department of Justice sued, claiming that the written test for police officer recruits was unfairly biased against black applicants.

The conclusion that Baltimore County’s written test for police officer recruits was unfairly biased against black applicants is tragic. It allows Baltimore public schools to continue to produce fraudulent education.

But there is one thing entirely within the control of educators. That’s their power to issue diplomas. When they confer high school diplomas on youngsters who cannot read, write, and compute at or near a 12th-grade level, they are engaging in fraudulent conduct.

Thomas Sowell’s research in “Education: Assumptions Versus History” documents academic excellence at Baltimore’s Frederick Douglass High School and others. This academic excellence occurred during an era when blacks were much poorer and faced gross racial discrimination. It’s worthwhile reading for black people to learn the capabilities of other blacks facing so many challenging circumstances.

I’m wondering when the black community will demand an end to an educational environment that condemns so many youngsters to mediocrity.