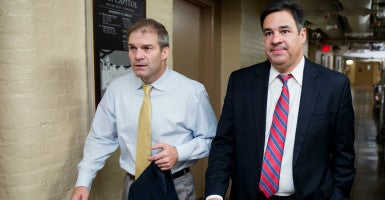 Rep. Jim Jordan, a former college wrestler and coach, looks ready to pounce from his chair as he taps his feet and leans forward his burly frame during a discussion about his expectations for the newly elected speaker of the House, Rep. Paul Ryan.

“I hope going forward, the new leadership, the new speaker, will understand what we have called ‘go early, stand firm,’” says Jordan, using a phrase that sounds like a wrestling mantra.

“What I mean is that when certain big issues come up, typically the spending issues, we need to determine a plan as an entire Republican conference. We need to rally around a position that is good for the American people, is consistent with what we told Americans we are trying to accomplish, and then just pass that. And then we tell the Senate and White House. ‘That’s where we’re at.’ And we’re going to stand firm on that position because that’s exactly what we told the voters we were going to do.”

For Jordan and the House Freedom Caucus, the group of 39 conservatives he leads, a surprise budget deal secretly negotiated by House and Senate leaders and the White House is exactly what they don’t want.

To them, it’s the kind of haphazard, compromised deal that symbolized the tenure of outgoing House Speaker John Boehner, R-Ohio, and inspired a move to oust him.

Ryan and the Freedom Caucus

Jordan and the Freedom Caucus credit Ryan, R-Wis., for criticizing the process by which Boehner negotiated the deal. Ryan ultimately voted for the budget deal, which passed the House on Wednesday despite Freedom Caucus opposition. Even so, Jordan’s support for Ryan hasn’t changed (the two are long-time friends who meet one-on-one regularly, and they are both gym rats).

On Tuesday, Jordan, R-Ohio, in a sit-down interview, envisioned a future House where newly empowered lawmakers are able to work with Ryan to communicate and, they hope, advance a conservative agenda.

He spoke broadly about leading in a bottom-up manner, and offered a commitment to return to the free debate of “regular order” and reform rules and process as a way to prove it.

After Jordan convinced him, Ryan vowed for now to keep in place the “motion to vacate” mechanism, the tool that Thomas Jefferson invented and Rep. Mark Meadows made famous as a vehicle to unseat a speaker. Rep. Paul Ryan, the new House speaker, earned the admiration of the Freedom Caucus for his commitment to changing rules and process. (Photo: Yuri Gripas/Reuters/Newscom)

Ryan swore he won’t bring up an immigration reform bill during President Barack Obama’s tenure, and that any immigration legislation thereafter would have to be supported by the majority of Republicans.

And Ryan was most specific when he outlined the policies he’s passionate about advancing, about how he would move to overhaul the tax code, replace Obamacare, and reform welfare.

After winning over the Freedom Caucus, Ryan has already begun to move on his plans.

As he secured the nomination for House speaker Wednesday, Ryan promised his colleagues he would restructure the Steering Committee by Thanksgiving, and lead a complete overhaul of rules by the end of the year.

It all sounds a lot like what Jordan and the Freedom Caucus want: “go early, stand firm.”

The Past and Future of the Freedom Caucus

In the interview, Jordan reminisced on how far the once-no-name Freedom Caucus has come, because, love them or hate them, this group of conservatives, who scared off Majority Leader Kevin McCarthy in his quest for speaker, is most responsible for Ryan’s expected ascension.

Jordan, staying true to the Freedom Caucus’ obsession of “process” over “people,” doesn’t take credit for a House revolution that he believes is already occurring.

That revolution earned the notice of the masses in July, when Meadows, R-N.C., a Freedom Caucus member, went against the wishes of some of his own group to use a rarely-used tool to try and depose Boehner. It reached a crescendo in September, when Boehner announced he would resign under pressure. And it became full-blown in October, when McCarthy, R-Calif., removed himself from the race to replace Boehner.

“That’s up to other people to figure out,” Jordan says. “What I hope is the end result is we put in place rule and process changes that create an environment that gives us a better chance to do what we told the voters we’d do. That’s first and foremost. We are not trying to elevate ourselves. We are just trying to stand up for those families who feel like they have been forgotten here in Washington.” That devotion to delivering what the people back home in their very red districts want, no matter the disruption it causes, is what has driven the Freedom Caucus from the beginning.

It’s what inspired Jordan and eight other founding members in January to splinter from the Republican Study Committee, a more established conservative group, to create their own.

But in a recognition of the limits of their power, the Freedom Caucus could not elevate one of their own into a speaker race they helped create. And despite the wishes of their most loyal supporters, the Freedom Caucus has cleared a path for Ryan to be the leader they can’t be, and to deliver the message and drive the agenda in a way that they can’t.

Jordan, like the rest his group, isn’t a man you would associate with patience. Known as an aggressive interrogator of powerful officials during hearings over Benghazi, the IRS and Planned Parenthood, Jordan talks fast, and often doesn’t take the time to put on his suit jacket.

He’s asking for critics—many have attacked the Freedom Caucus on Facebook and Twitter—to be patient of Ryan.

“I let people write about that; I don’t get into that,” Jordan said of criticism. “I’d like to say we are doing what we told the voters we were going to do and that’s our focus. Look, we think there are big changes already happening in the House of Representatives, big changes already happening in the Republican conference—on the rules and process side, and where we are going to go with policy in the future. Time will tell. Time will tell.”

In a lengthy defense of Ryan, Jordan added:

“He hasn’t been afraid to take big bold positions and we think that’s important—positions that are pretty consistent with where Freedom Caucus members are on those issues. We think he’s been strong and bold and that’s where we want to go in the future as well.”

The Impact of the Freedom Caucus

Under Boehner, who conservatives say was never a natural ally, Freedom Caucus members insist they have made an impact on policy.

But their role has been more defense than offense.

In a rundown of their victories so far, Jordan ticks off a history of “striking bad policy.”

Jordan also says the Freedom Caucus has shown an ability to overcome adversity, especially how it beat back “a culture of punishment” that they say has been directed at their members under Boehner.

Life will be different under Ryan, Jordan hopes.

“Paul has said how he will set up additional conferences each week, how he wants to figure out our positions early and once we figure those out, pass them and stand firm on those positions,” Jordan says.

“That’s exactly the model we think makes sense and that’s exactly how you bring the entire team—not just the House Freedom Caucus, but the entire Republican conference team—together. So if we do that model, that’d be good.”