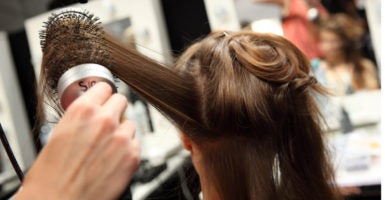 Nashville-based Project Belle connects beauty professionals and prospective clients, who can schedule appointments at the location of their choosing. The Tennessee Board of Cosmetology and Barber Examiners attempted to shut Project Belle down, arguing the website didn't meet licensing requirements for cosmetology shops. (Photo: Caro/Schwarz/Newscom)

Armand Lauzon is working to revolutionize the beauty industry in Nashville.

But until Monday, the Tennessee Board of Cosmetology and Barber Examiners, a state regulatory board that oversees the beauty industry, wanted to make Lauzon’s quest much more difficult—ordering him to shut down his website, Project Belle, and pay a $500 fine.

Project Belle connects beauty professionals and prospective clients, who can schedule appointments directly with cosmetologists, massage therapists, manicurists, hair stylists, fashion stylists, and chiropractors for the place of their choosing.

It’s Uber, but for beauty professionals, as the Nashville Business Journal put it.

But in July, the Tennessee Board of Cosmetology and Barber Examiners sent Lauzon and Project Belle a cease-and-desist letter after receiving a complaint from an established Nashville salon owner.

Lauzon, with the help of a lawyer, Daniel Horwitz, fought back on the grounds that Project Belle isn’t a cosmetology shop, but rather a technology company.

And on Monday, the regulatory board dropped its complaint, allowing the company to continue operating.

But even though Lauzon was successful in his challenge, his experience with the Board of Cosmetology and Barber Examiners underscores a broader debate taking place in cities nationwide, as elected officials and regulatory boards try to grapple with a changing economy.

“That’s what this came down to, was competition,” Lauzon told The Daily Signal. “We’re growing really nicely and we’re offering people, workers really, a whole new way to work, and some established interests don’t like that competition.”

Lauzon had the idea for Project Belle after he watched his cousin, a manicurist, struggle to juggle motherhood and work after having a baby.

Beauty professionals who work in brick-and-mortar salons, Lauzon learned, have to adhere to a strict schedule, and many have to “rent” their workspace from that salon, handing over as much as 85 percent of generated revenue.

Prospective clients can schedule appointments with cosmetologists through Project Belle’s website, and the beauty professional then comes to the home or business, no salon needed.

Project Belle began accepting appointments from customers in December. So far this year, more than 200 customers have booked upward of 500 appointments.

Clients can choose from more than 50 beauty professionals—all of them licensed—listed on Project Belle’s website.

For several months, Project Belle flew under the radar, yet grew rapidly in Nashville.

But in February, the owner of a Nashville salon complained to the Tennessee Board of Cosmetology and Barber Examiners, about the website.

In her complaint, Karen Kops, the owner of a natural nail salon, asked the board to investigate Project Belle, which Kops believed was operating “outside of current state law rules.”

“As a business owner with a brick-and-mortar shop adhering to all state law requirements, I find this type of competition highly disturbing,” Kops wrote in her complaint.

Five months later, a lawyer with the state Board of Cosmetology and Barber Examiners sent Lauzon a notice ordering him to pay a $500 fine and shut down his website.

According to the consent order sent to Lauzon, the board reviewed Project Belle’s website and determined he was allowing licensed beauty professionals to do “in-home work” without having a cosmetology shop license.

Tennessee state law requires that a salon be “placed on a permanent foundation or otherwise rendered immobile,” and because Project Belle’s beauty professionals went to their client’s locations, the Board of Cosmetology and Barber Examiners said the company was breaking the law.

The state has some exceptions for at-home services—if a customer is sick, in a nursing home, or preparing for movie productions, photo sessions, or “similar activities,” for example—but the board said Project Belle didn’t allow customers to verify if their appointment fell into one of the exceptions.

But Lauzon says he doesn’t operate a beauty salon, nor does he perform cosmetology services.

Project Belle is a technology company, he said, one that simply connects licensed cosmetologists to customers. The Tennessee Board of Cosmetology and Barber Examiners doesn’t have jurisdiction over technology companies, his lawyer, Horwitz, wrote in a response to the board.

“Belle’s mission is to empower people to open up their own business with technology and have a flexible profession and career, while at the same time delivering convenience right to clients,” Lauzon said.

“The law in Tennessee clearly states that the board of cosmetology has jurisdiction and oversight over licensed cosmetologists and cosmetology shops. We are definitely neither,” he continued. “We’re a technology provider. We’re a software company. We’re merely a third party that connects these two parties together.”

During a monthly meeting Monday, the Board of Cosmetology and Barber Examiners decided to drop its complaint against Project Belle, and a similar service, Stylist on Call.

The board agreed with Lauzon and said that because both are technology companies, they operate outside of their jurisdiction.

Back Down to Earth

Though the Tennessee Board of Cosmetology and Barber Examiners ultimately decided to allow Project Belle to continue operating, city councils and local officials nationwide have been attempting to respond to the technology companies that have sprouted up in the growing sharing economy.

In Austin, city officials passed ordinances tightening the restrictions on short-term rentals, banning them by 2022 and making it difficult for residents to rent out their homes on websites like Airbnb and HomeAway.

The Texas Public Policy Foundation is currently suing the city on behalf of resident Ahmad Zaatari over its short-term rental ordinances.

Other cities decided to ban ride-hailing services like Uber and Lyft as they began to grow in popularity, which some say was done to protect taxi companies.

Today, though, officials like those in Miami-Dade County, Florida, have voted to overturn those bans.

And in Baltimore, regulations make it nearly impossible for mobile vendors like food trucks to sell their products within city limits. Critics of the rules argue they exist solely to protect brick-and-mortar restaurant owners, and the Arlington, Virginia,-based Institute for Justice filed a lawsuit with food truck owners Joey Vanoni and Nikki McGowan challenging Baltimore’s mobile vending rules.

Regulations like those in Austin, Baltimore, and Nashville, which often affect new competitors entering the markets, stifle innovation and entrepreneurship, Braden Boucek, director of litigation at the Beacon Center of Tennessee, said.

“These are business models that are thinking of new ways to come at established ways of providing services,” he told The Daily Signal, referencing new companies like Uber, Airbnb, and Project Belle. “Part of the reason why they’re advantageous is because they’re a better, more creative way of thinking about it. When you just wrap the old regulations around them, you’re really just bringing them back down to earth and turning them into what they’re trying to innovate beyond.”

Boucek said that instead of addressing new companies on a case-by-case basis, as Tennessee has done with Project Belle, elected officials need to have a larger conversation about the sharing economy.

“Policymakers need to think big on this issue, otherwise it’s going to be having to address these one-by-one as they pop up,” he said. “They need to be thinking about laying the groundwork for the new economy and ushering in a new chapter of flourishment for both people and the economy.”

For his customers, Lauzon said Project Belle is opening up access to beauty services, especially for those who are disabled or elderly.

One Project Belle client, he said, is an 80-year-old woman in a wheelchair who has a hard time with mobility. But she’s able to schedule beauty services through the website, and her cosmetologist comes directly to her home.

Lauzon said that was “life changing” for the elderly woman, and that’s something the Board of Cosmetology and Barber Examiners didn’t realize.

“There’s a large group of people who cannot get [these services] right now,” he said. “I think what Belle is doing is really meeting and discovering this unmet need and serving it to people and helping both sides of the marketplace—the clients and the professionals—in a meaningful way.”

And Project Belle isn’t only changing the game for clients, but for beauty professionals, too.

His service allows cosmetologists, fashion stylists, chiropractors, and massage therapists to set their own schedules, determine their own pricing, and put more of the money they make into their own pockets.

Project Belle handles the marketing, payment, and bookings for each beauty professional, and keeps 15 percent of each transaction.

Lauzon said that freelancing, as those stylists on Project Belle do, brings more competition to the market, which not only pushes employees to change their business practices, but also lowers prices for consumers.

“Professionals should be able to freelance in a way that they see fit, and whether that’s with us or by themselves, we think that everyone has that right. The law as it stands does not allow that,” he said. “[Project Belle is] safe for now, but we want all professionals in the state to be safe and have the ability to follow the American dream.”

Lauzon plans to continue to grow Project Belle in Nashville and is working with state lawmakers to change Tennessee’s laws regarding mobile services, which he says gives brick-and-mortar salons the upper hand over cosmetologists.

He also recognizes that when Project Belle expands to other cities outside of the state in the future, Lauzon may be facing regulatory boards like the Tennessee Board of Cosmetology and Barber Examiners who want to keep new companies from competing against established market participants.

But that won’t deter him.

“We’re going to be proving why it’s a good thing to change and liberalize and allow more competition, allow more workers freedom, and allow consumers to choose,” Lauzon said. “At the end of the day, consumers really deserve that choice.”

This article has been updated to include a statement from the Tennessee Department of Commerce and Insurance.