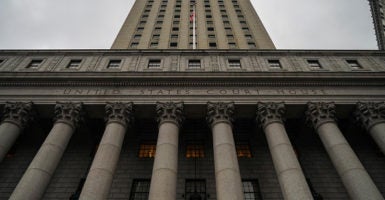 The Thurgood Marshall U.S. Courthouse in Manhattan is the venue for cases from the 2nd U.S. Circuit Court of Appeals, among others. President Donald Trump has announced a nominee for one of two vacancies on the 2nd Circuit. (Photo: Drew Angerer/Getty Images)

President Donald Trump has announced nominees for two of the four current vacancies on U.S. appeals courts, where the vacancy rate is already at a 35-year low.

Trump last week announced his intention to nominate Danielle J. Hunsaker of Oregon to serve on the 9th U.S. Circuit Court of Appeals, which covers most Western states.

The president also announced he will nominate William J. Nardini to the 2nd U.S. Circuit Court of Appeals in New York.

The remaining vacancies include another seat on the 2nd Circuit and one on the 5th Circuit.

Hunsaker, currently the presiding judge on the Washington County Circuit Court of Oregon, has been a judge since 2017. She was previously a partner at the law firm of Larkins, Vacura, Kayser LLP in Portland, Oregon, a practice that focused on federal appeals.

Hunsaker is a graduate of the University of Idaho College of Law and was the lead articles editor of the Idaho Law Review.

Trump and a Republican-controlled Senate have moved quickly on judicial nominations. The president’s appointments have brought balance to the 9th Circuit, a jurisdiction with a reputation for liberal rulings that has long been a source of frustration for conservatives. It is among the most overturned circuits on appeal.

Trump has earned an 87.8% confirmation rate for his appeals court nominees, according to The Heritage Foundation’s Judicial Tracker.

Nardini is currently an assistant U.S. attorney for the District of Connecticut and is chief of the Criminal Division.

He clerked for then-Supreme Court Justice Sandra Day O’Connor and is a graduate of Yale Law School, where he served as executive editor of the Yale Law Journal.

“Bill Nardini is an excellent choice for the open seat on the Second Circuit. Bill and I worked together at the United States Attorney’s Office in New Haven for eight years,” John Marrella, former U.S. deputy assistant attorney general for the Justice Department’s Tax Division, said in a prepared statement.

“He is a highly effective trial attorney and a superior appellate advocate, with almost 20 years of prosecutorial experience,” Marrella said. “He has a first-rate temperament and an outstanding legal mind. Throughout his career, Bill has demonstrated a commitment to the Constitution and the rule of law. In addition to his stellar professional qualifications, he is a man of great personal virtue and probity.”

Nardini served as the Justice Department attaché at the U.S.  Embassy in Rome from 2010 to 2014. He was a law clerk to federal Judges Jose A. Cabranes and Guido Calabresi, both of the 2nd Circuit.

“William Nardini is a splendid nominee to the U.S. Court of Appeals for the Second Circuit, combining outstanding credentials with a clear commitment to constitutionalist jurisprudence and the rule of law,” Liebau said in a written statement. “We would be fortunate to have someone of his caliber on the federal bench.”