In Misguided Response to Charlottesville, Apple Donates to Liberal Group That Endangers Conservatives 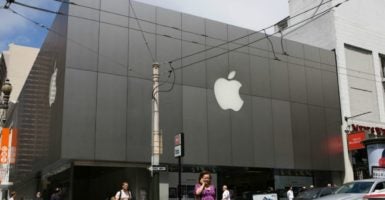 “What occurred in Charlottesville has no place in our country. Hate is a cancer, and left unchecked it destroys everything in its path,” Apple CEO Tim Cook says. (Photo: Caro/Therese Aufschlager/Newscom)

In trying to fight racism—a laudable goal—Apple CEO Tim Cook has made a huge mistake by choosing to donate $1 million to the Southern Poverty Law Center, an organization that smears some conservative groups as “hate groups.”

“What occurred in Charlottesville has no place in our country. Hate is a cancer, and left unchecked it destroys everything in its path,” Cook wrote in an email to Apple employees Wednesday announcing the donation, according to BuzzFeed.

Apple will be making contributions of $1 million each to the Southern Poverty Law Center and the Anti-Defamation League. We will also match two-for-one our employees’ donations to these and several other human rights groups, between now and September 30.

In the coming days, iTunes will offer users an easy way to join us in directly supporting the work of the SPLC.

There is no equivalence between the actions and views of a KKK supporter and a traditional marriage supporter.

Yet that equivalence is exactly what the Southern Poverty Law Center’s “hate groups” list promotes, by listing groups like the American Nazi Party and Aryan Nations on the same list as Alliance Defending Freedom, a law firm that just won a case in front of the Supreme Court this year, and Family Research Council, a respected social conservative group.

And it’s not just social conservatives at risk: It’s anyone who disagrees with the left’s thinking who can be tarred as a hater.

The SPLC … also labels moderates with whom it disagrees ‘extremists’ if they deviate from its rigid political agenda, which embraces open borders, LGBT rights, and other left-wing totems. The SPLC has branded Somali-born reformer Ayaan Hirsi Ali an ‘anti-Muslimn extremist’ for her opposition to female genital mutilation and other oppressive Islamic practices, and designated the respected Family Research Council as a ‘hate group’ for its opposition to same-sex marriage.

James T. Hodgkinson, the alleged shooter of Rep. Steve Scalise, R-La., and others at the baseball field just this June, was a fan of the Southern Poverty Law Center on Facebook, according to Washington Examiner.

Had it not been for the courageous actions of the Capitol Police, there would have been a massacre that day of the lawmakers playing baseball.

Furthermore, in 2012, Floyd Corkins, who was armed, went to the Family Research Council. “Corkins—who had chosen the research council as his target after finding it listed as an anti-gay group on the website of the Southern Poverty Law Center—had planned to stride into the building and open fire on the people inside in an effort to kill as many as possible, he told investigators, according to the court documents,” reported CNN in 2013.

He was only stopped because of the efforts of a security guard.

So when Apple donates to the Southern Poverty Law Center, it’s donating to a group whose smears of conservatives have already contributed to real violence against good people.

Again: It’s laudable and understandable for Apple to respond to the events of Charlottesville by wanting to take action against racists. It was horrifying to see the footage of men in the streets of the United States shout “Jews will not replace us.”

It’s unbelievable that 32-year-old Heather Heyer was killed and 19 others injured because a car was plowed into a group of counterprotesters. The driver of the car, James Alex Fields Jr., has been charged with second-degree murder.

According to Derek Weimer, who told the Associated Press he was a high school history teacher of Fields, “Once you talked to James for a while, you would start to see that sympathy towards Nazism, that idolization of Hitler, that belief in white supremacy.” (Weimer also claimed Fields had told him he had been diagnosed with schizophrenia.)

As Attorney General Jeff Sessions said Saturday in a statement, “The violence and deaths in Charlottesville strike at the heart of American law and justice. When such actions arise from racial bigotry and hatred, they betray our core values and cannot be tolerated.”

We should push back against the hateful actions in Charlottesville—the actions of the Nazi and KKK sympathizers, the white supremacists, and yes, the actions of Antifa as well—and it’s commendable that Apple’s Cook wants to do so.

But unfortunately, in choosing the Southern Poverty Law Center, Cook is promoting an alternate hate-filled agenda targeting social conservatives and others.