The Force Is Not With You: Government Rules Could Land ‘Star Wars’ Drone Pilots in Prison 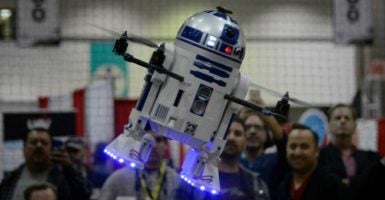 What kid hasn’t watched “Star Wars” and imagined skimming the Death Star trench in an X-Wing, tangling with TIE Fighters to save the Rebel cause?

For a long time, playing out these flights of fancy was restricted to video games. But thanks to drone technology—not quite anti-gravity, but close—the Force may be coming to a neighborhood near you. A company known as Propel is marketing “Star Wars Battle Quads”—faithful miniatures of some of the most iconic craft from that galaxy far, far away—that can dogfight one another above your backyard.

When the models are released, enthusiasts will be able to blast out of their backyard spaceport in the Millennium Falcon, tangle with Darth Vader’s TIE Fighter, or dodge trees on Imperial speeders.

But, kids (and let’s be honest, adults, too), before you get too excited, keep this in mind: While most people will see these as harmless toys, regulators at the Federal Aviation Administration claim these palm-sized drones are “aircraft” no different than a passenger-laden 747 jet. That means that drones are subject to a host of federal laws and regulations that were originally written for manned aircraft, and carry severe civil and criminal penalties that are disproportionate in this context.

Here are just a few of the absurd crimes the FAA could accuse you of committing:

Destroying an aircraft—According to 18 U.S.C. § 32, anybody who willfully “damages, destroys, disables, or wrecks any aircraft in the special aircraft jurisdiction of the United States” has committed a felony punishable by up to 20 years’ imprisonment. Amazingly, the FAA has confirmed that this statute applies to drones, even though it is abundantly clear that Congress wrote the statute to criminalize takedowns of traditional, manned aircraft by terrorists and criminals. So, dogfight at your own risk—and don’t even think about recreating the speeder bike chase on Endor.

Failing to register as a drone owner—Last December, just days before Christmas, the FAA released a rule mandating that all drone owners register themselves with the FAA if the drone they are flying is used for hobby or recreational purposes, and weighs more than 0.55 pounds—the equivalent of two sticks of butter. Failure to register before your first flight constitutes a felony punishable by up to $277,500 in fines and three years’ imprisonment, a penalty scheme that the FAA’s own drone registry task force noted was utterly disproportionate in the drone context.

As if this is not bad enough, hapless drone operators flying purely for fun could find themselves fined for failing to comply with commercial drone regulations. For years, the FAA has divided drone activities into “recreational” and “commercial” categories along largely arbitrary and ill-defined lines. The result: Someone may think that he is flying purely for fun, but the FAA might think otherwise, and proceed to fine him for failing to comply with rules he did not know applied to him.

In fact, in one case, the FAA targeted a drone operator in Florida in precisely this fashion, determining that since he posted videos of his drone joyrides on YouTube, a site that had advertisements, his activity was, in fact, commercial. Another man, Mical Caterina, used a drone to photograph an event protesting the killing of Cecil the Lion. He did this as a favor to a friend, and for his troubles the FAA is now fining him $55,000 for failing to comply with commercial drone rules.

Thanks to draconian rules likes these, arbitrarily enforced by FAA bureaucrats without concern for the costs of unpredictable regulatory enforcement, yours may be the drones they’re looking for. It’s no wonder that some might yearn to become a Rebel and take out their frustrations on the Empire’s finest.

But future X-Wing pilots should probably restrict themselves to bull’s-eyeing womp rats instead of other drones, because if you actually take down Darth Vader’s toy TIE, you could find yourself hauled before a judge on federal felony charges. And no, “restoring peace and justice to the Galaxy” is not likely to be a winning defense.