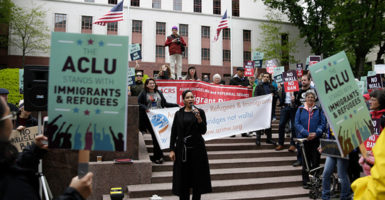 Protesters gather outside the 9th U.S. Circuit Court of Appeals in Seattle on May 15, 2017, as judges prepare to hear arguments on President Donald Trump's revised restrictions on travel from certain countries. (Photo: Jason Redmond/AFP/Getty Images)

The Trump administration gained a rare victory this summer in the most unlikely of venues—the 9th U.S. Circuit Court of Appeals, which is widely viewed as the most liberal federal appeals court.

One big reason: President Donald Trump’s appointments to the 9th Circuit have moved it closer to ideological balance.

The court, long known for being both liberal and among the most overturned circuits, has been a thorn in Trump’s side, ruling against the president multiple times, mostly on immigration policies.

The confirmation of Trump nominee Daniel Bress in July gave the president his seventh judge on the court. It also brought the once lopsided appeals court to 16 Democrat appointees and 12 Republican appointees, with one remaining vacancy.

The administration won a 3-0 victory in June regarding a Department of Health and Human Services policy to restrict funding for family planning clinics that perform abortions.

While Trump hasn’t flipped the majority on the entire 9th Circuit, his progress increases the likelihood that randomly drawn three-judge panels will have more originalists, said Travis Weber, vice president for government affairs at the Family Research Council.

“The new judges will increase the credibility of this court,” Weber told The Daily Signal, noting that it long has been derided by conservatives as the “9th Circus.”

“We should have judges that interpret the Constitution rather than activists trying to legislate from the bench, which we’ve seen from the 9th Circuit,” he said.

Weber noted that most recently, the 9th Circuit has been the go-to venue for liberal activists seeking to block the agenda of the Trump administration.

This includes policies denying federal funds to “sanctuary cities,” which are local jurisdictions that refuse to assist federal immigration agents.

The court also has thwarted the administration’s “extreme vetting” policy designed to prevent migrants from failed states, including several majority Muslim countries, from coming to the United States.

The California-based 9th Circuit is the nation’s largest appeals court, encompassing California, Alaska, Arizona, Montana, Nevada, Hawaii, and Oregon. It now has more Trump-appointed judges than any other appeals court, according to Bloomberg News.

The 9th Circuit is responsible for about 40% of the United States and 30% of all appeals, says Sen. Steve Daines, R-Mont., who wants to split up the circuit to produce more fair hearings for Montana residents.

Senate Judiciary Chairman Lindsey Graham, R-S.C., commented in January: “I’m very supportive of the nominees submitted by President Trump to serve on the 9th Circuit Court of Appeals. … These nominations continue a trend by the Trump administration of selecting highly qualified men and women to serve on the federal bench.”

Judicial nominees have been one of Trump’s crowning achievements, as he has named more than 40 appeals court judges as well as two Supreme Court justices. While not having as much success at the district court level, the president has secured some 80 confirmations.

“It would take a long time, if it ever happens, before the full 9th Circuit has enough constitutional judges for a pattern to take effect,” Thomas Jipping, deputy director of the Edwin Meese Center for Legal and Judicial Studies at The Heritage Foundation, told The Daily Signal.

Because of Trump’s prolific filling of circuit court vacancies, currently only five of the 179 appeals court judgeships are vacant, Jipping said. But, of those, four seats were held by Republican-appointed jurists, he added.

To flip a court, Trump would have to replace Democratic nominees with Republican nominees. Even then, it’s not a sure thing to secure originalist interpretations, Jipping said.

“But every case is different,” he said. “Judges don’t make widgets.”