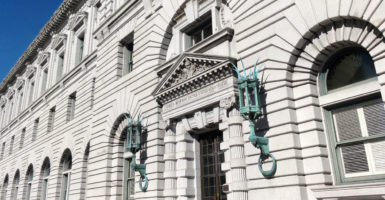 The 9th U.S. Circuit Court of Appeals used to be the closest thing Democrats had to a sure thing.

Chock-full of activists, the West Coast bench has been so wildly out of step with the law that it used to hold the distinction as the “most reversed” appeals court in the country.

Now, after three years of record-shattering judicial confirmations, President Donald Trump is on the verge of balancing the “Nutty Ninth”—and most Americans couldn’t be happier.

It’s a feat no GOP president has managed: taking the “liberal” out of “liberal 9th Circuit.”

Thanks to the White House’s laser-like focus on courts, the possibility grows stronger every day.

With the help of Senate Majority Leader Mitch McConnell, R-Ky., Trump has all but leveled the field—placing six judges on the bench and bringing the number of Republican appointees to 11.

If Daniel Aaron Bress is confirmed (after his hearing last month), the Senate will have brought that total to an “even dozen” of the court’s 29.

In some cases, the shift is already being felt. On Thursday, three judges from the 9th Circuit handed the president a significant victory, voting 3-0 to let his “family planning” rule take effect while the legal challenges play out.

“Absent a stay,” the trio wrote, “HHS will be forced to allow taxpayer dollars to be spent in a manner that it has concluded violates the law, as well as the government’s important policy interest in ensuring that taxpayer dollars do not go to fund or subsidize abortions.”

After years of sending Title X dollars to the same location as some abortion centers, Trump announced an important change. Restoring the policy of Ronald Reagan, he decided that groups like Planned Parenthood could only keep their family planning money if they moved their abortion activities offsite.

It was a significant move—one that could cost Leana Wen’s group as much as $60 million, the single largest drop in Planned Parenthood’s taxpayer funding in almost 50 years.

The abortion industry sued. As far as it’s concerned, abortion is family planning—and it refuses to stand by and allow the White House to sever any strand of its taxpayer-funded ties.

At least for now, the 9th Circuit is giving the administration the benefit of the doubt, letting HHS draw a bright line between abortion and family planning programs—just as courts have upheld.

The [DOJ’s] position is supported by long-standing Supreme Court precedent … We are pleased that the 9th Circuit has cleared the way for this important executive branch action to take effect while our appeals are pending.

And even more pleased, no doubt, that the president’s policies are starting to get a fair shake in the court where lawlessness almost always prevailed.