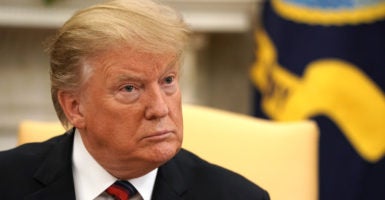 “We don’t need China and, frankly, would be far better off without them," President Donald Trump tweets. Pictured: Trump talks to reporters May 3 while hosting Slovak Republic Prime Minister Peter Pellegrini at the White House. (Photo: Chip Somodevilla/Getty Images)

President Donald Trump told U.S. companies Friday to “start looking for an alternative” to China for business, after that country announced a 25% tariff on all U.S. automobiles and a 5% to 10% tariff on $75 billion worth of U.S. goods.

Trump tweeted that bringing companies back home would be a “GREAT opportunity” for the United States. The announcement came a day after the president said he is “the chosen one” to handle trade with China.

“Our great American companies are hereby ordered to immediately start looking for an alternative to China, including bringing your companies HOME and making your products in the USA,” Trump wrote on Twitter. “I will be responding to China’s Tariffs this afternoon. This is a GREAT opportunity for the United States.”

“We don’t need China and, frankly, would be far better off without them. The vast amounts of money made and stolen by China from the United States, year after year, for decades, will and must STOP,” the president continued.

“Also, I am ordering all carriers, including Fed Ex, Amazon, UPS and the Post Office, to SEARCH FOR & REFUSE, all deliveries of Fentanyl from China (or anywhere else!),” Trump said. “Fentanyl kills 100,000 Americans a year. President Xi said this would stop—it didn’t. Our Economy, because of our gains in the last 2 1/2 years, is MUCH larger than that of China. We will keep it that way!”

The Chinese State Council said that “China was forced to take countermeasures” against “measures by the U.S.,” in reference to additional tariffs Trump said he would implement on $300 billion of Chinese goods, set to take effect Dec. 15, CNBC reported.

“The Chinese side hopes that the U.S. will continue to follow the consensus of the Osaka meeting, return to the correct track of consultation and resolve differences, and work hard with China to end the goal of ending economic and trade frictions,” the Chinese statement said.