Trump Backs Down on Rescinding $4 Billion in Foreign Aid 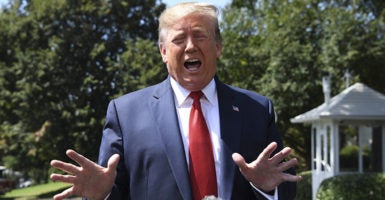 President Donald Trump has opted against a cost-cutting measure to cancel more than $4 billion in budgeted foreign assistance, much of which he previously deemed as wasteful.

Days earlier, the administration had cited U.S. taxpayer dollars going to projects such as border security in Asia, crop diversity in Bangladesh, solar panels in Central Asia, and family planning in West Africa as projects to be cut.

The move Thursday to scrap a spending freeze on certain foreign aid programs appears to be a victory for House Speaker Nancy Pelosi, D-Calif., who wrote a letter to Treasury Secretary Steven Mnuchin complaining that the rescissions would “violate the good faith of our budget negotiations.”

The Trump administration initially was set to roll out a “rescissions” plan for the State Department this week. Rescission is the process by which the president can pull back congressionally appropriated—but unspent—money.

The president initially informed Congress in a letter in May of plans to pull back $15 billion.

“The president has been clear that there is waste and abuse in our foreign assistance, and we need to be wise about where U.S. money is going,” a senior administration official said in a statement. “Which is why he asked his administration to look into options to doing just that. It’s clear that there are many on the Hill who aren’t willing to join in curbing wasteful spending.”

Had Trump followed through, it could have been his first victory for reining in spending.

In March 2018, Trump threatened to veto a spending bill, but yielded to get funding increases for the military. However, he called the $1.3 trillion omnibus budget bill “ridiculous.”

“I’m not going to do it again,” he said, before signing the package into law.

But, in July of this year, Trump gave Pelosi most of what she wanted in a budget deal that temporarily suspended the debt ceiling—limits on borrowing—while increasing spending by $300 billion.

The proposed rescissions reportedly involved allowing expiration of $2.3 billion for the U.S. Agency for International Development and $2 billion for the State Department, including $787 million for United Nations international peacekeeping activities, $522 million in core funding for the U.N., and $364 million for a range of U.N. humanitarian and human rights programs.

Some of the expenditures were also projected to be for desert-survival courses in Egypt, diversion programs for felons in El Salvador, and agriculture technology in Guatemala.

It wasn’t only Pelosi and Democrats who opposed the rescissions measure.

“While foreign aid is necessary at times to strengthen alliances, that aid needs to be effective,” Green told The Daily Signal earlier this week, when it appeared the administration would move forward with withholding the money.

“Unfortunately, today, many taxpayer dollars included in the rescissions package are directed to U.N. organizations, which in some cases, are hostile to the United States,” said the Tennessee lawmaker, who serves on the House Oversight and Reform Committee.

“This money should be returned to the taxpayers, rather than given to anti-American, anti-democratic groups,” he said.