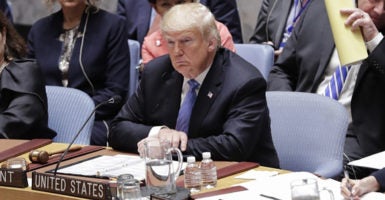 The Trump administration is expected to present a “rescissions” package for the State Department that it says would save $4 billion in foreign assistance. Pictured: President Donald Trump participates in a U.N. Security Council meeting Sept. 26 on countering weapons proliferation at U.N. headquarters in New York City. (Photo: EuropaNewswire/Gado/Getty Images)

Amid contentious debate in Washington on how much to devote to securing the southern border, what might surprise some is that tax dollars are going to finance border security for countries in the Pacific and in East, South, and Central Asia.

That’s not all, because the United States is paying for border security for a dozen nations, including El Salvador, one of the countries with the largest number of illegal immigrants crossing into the United States.

The Trump administration is set to present a “rescissions” package for the State Department this week that it says would save $4 billion in foreign assistance.

Rescissions is the process by which the president requests that Congress revoke or cancel appropriated but still unspent funds. President Donald Trump initially informed Congress in a May letter of plans to pull back $15 billion in budgeted but unspent money.

The administration is in the process of negotiating rescissions with the State Department, evaluating nine accounts for possible waste of taxpayer dollars.

“The president himself has stated that there is a lot of fat in the foreign assistance we provide,” a senior administration official told The Daily Signal. “And while there are many great programs we support around the world, these are the ones most riddled with abuse and waste,”

There isn’t yet a specific line-by-line account of how this recaptured money would be spent, but administration budget officials have certain expenses in their crosshairs.

These include U.S. taxpayer funding for:

“The United States should not be financially responsible for crop diversity in Bangladesh, purchasing solar panels in Central Asia, and footing the bill for border protection in Central and South Asia—when we can’t even get Congress to secure our own borders,” the senior official said. “This administration is committed to cutting wasteful spending, which is why this rescissions package is so important and timely.”

In January, Trump criticized Democrats for wanting to add about $12 billion in foreign aid.

“You see that the Democrats want to give away $12 billion extra, and we’re [already] giving away $54 billion in foreign aid,” Trump said at a Cabinet meeting.

“So we give money to countries, but we don’t give money to our own country, which is another thing that I’ve been complaining about and we’re cutting that back,” the president said. “It’s very unfair when we give money to Guatemala and to Honduras and to El Salvador, and they do nothing for us.”

“These funds, which were appropriated by Congress and signed into law by the president following lengthy, bipartisan negotiations, are essential to promoting U.S. global leadership and protecting the security of the American people,” the lawmakers’ letter says. “We urge you to make them available for obligation without further day.”

Other members of Congress are backing the move.

“America is on track to hit the $24 trillion debt mark by 2021! This year’s deficit is expected to near $1 trillion,” Rep. Mo Brooks, R-Ala., told The Daily Signal in a written statement. “While congressional debt junkies go wild and attack President Trump, I applaud him for proposing cuts in foreign aid spending. Every dollar America spends on foreign aid is money we don’t have, have to borrow to get, and cannot afford to pay back. America must get its fiscal house in order before assisting other nations.”

Foreign aid and its effectiveness have been a longstanding debate.

From a fiscal standpoint, the details are not yet in, said Justin Bogie, a senior policy analyst in fiscal affairs for The Heritage Foundation.

“In general, we are supportive of the president using his rescission authority in an effort to reduce wasteful or inappropriate spending, rescind unobligated balances, etc. and then using those savings for deficit reduction,” Bogie told The Daily Signal.

“It’s an authority that has existed almost as long as the U.S. government and was a fairly uncontroversial practice up until the 1970s,” Bogie said. “Rescissions aren’t a cure-all by any means, but are a way to make ‘good government’ type reforms and provide another opportunity to talk about spending priorities.”

The United States shouldn’t zero out funding for U.N. peacekeeping, said Brett Schaefer, senior research fellow in international regulatory affairs at The Heritage Foundation. But, he said the U.S. should stick to the 25% cap. Before supporting, he wants to see more details.

“The details of the rescissions package and without knowledge of the each proposal, it’s difficult to know the full impact on U.S. foreign policy,” Schaefer told The Daily Signal.

Further, foreign aid programs administered through the United Nations—largely funded by U.S. taxpayers—historically have prompted charges of waste and abuse.

In 2008, The Washington Post reported that U.N. officials in Sudan “squandered millions by renting warehouses that were never used, booking blocks of hotel rooms that were never filled, and losing thousands of food rations to theft and spoilage, according to several internal audits by the U.N. Office for International Oversight Services.”

Nongovernmental organizations, or NGOs, have anticipated the Trump administration’s rescissions and voiced opposition.

“Whether it’s competing with China, fighting Ebola, or countering Russia, it’s no surprise that these powerful lawmakers are raising deep concerns about slashing our nation’s development and diplomacy programs,” Liz Schrayer, president of the U.S. Global Leadership Coalition, an NGO coalition, said in a formal statement. “I certainly take Congress at their word that they’ll use every available tool to stop cuts to the State Department and USAID.”

USAID is the U.S. Agency for International Development.

The expected cuts are neither a matter of isolationism nor ignoring the needy, the senior administration official argued. Rather, the official said, throwing money at poor nations has a track record of creating corruption and cronyism.