The Unchanging Principles of Conservatism Defined 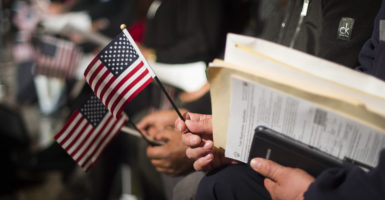 As the left continues to push policies like "Medicare for All," free college tuition, open borders, and depleting the strength of the military, conservatives must counter these policies with a strong voice. Pictured: Candidates from 25 different countries hold American flags during a naturalization ceremony in Washington, D.C., Dec. 15, 2015, the 224th anniversary of the Bill of Rights. (Photo: Jim Watson/AFP/Getty Images)

At The Heritage Foundation, we’re always thinking about ways to talk to new and nontraditional audiences about how conservative principles can create the greatest freedom, opportunity, prosperity, and civil society for the American people.

We realize that for these ideas to take hold, we have to counter the false narratives of left-leaning media outlets, educational institutions, and politicians.

We also see how messaging to new audiences can be diluted when some institutions and politicians who bear the “conservative” label drift far from fundamental conservative principles.

This not only hurts the conservative brand, but it also leaves these audiences thinking we’re not authentic about our views and that we change them based on convenience. It harms our credibility and leaves them thinking what we told them was right and true really wasn’t.

Many institutions and politicians start out as conservative, but if they’re not firmly rooted in principles, they can deviate from the path.

This is called trajectory: In physics, think of throwing a ball straight ahead. Eventually, forces like wind and gravity will cause the ball to curve and drop instead of continuing straight.

Since principles are meant to represent our highest ideals and should be based on fundamental truths, they should mostly be unchanging.

While good conservatives may have differing viewpoints about some aspects of conservatism, there are certain fundamental principles where we must remain resolute. In fact, at The Heritage Foundation, we call them the True North principles because they represent a fixed direction on which to stay focused, regardless of which ways the forces may be pressuring us.

Some of these major principles include:

These are just some of the unchanging principles of conservatism.

As the left continues to push policies like “Medicare for All,” free college tuition, open borders, and depleting the strength of the military, conservatives must counter these policies with a strong voice.

We must convince more and more people that our ideas work better and can assure a more free and prosperous future for all Americans. If we don’t do that, and more Americans succumb to the false promises of the statists, we soon won’t recognize America.

If ever there was a time we needed to be clear about our principles, it is now.