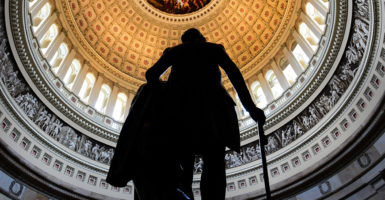 Works of art or pieces of history are increasingly likely to be subjected to hectoring and ideologically blinkered screeds aimed at modern political opponents. Pictured: A statue of George Washington dominates interior murals and other art beneath the U.S. Capitol dome, as seen in 2013. (Photo: Linda Davidson/The Washington Post/Getty Images)

No American historical figure, including the Father of Our Country, is safe from the war on history.

The San Francisco School Board voted 4-3 Tuesday not to tear down a mural at a local high school depicting the life of George Washington.

The school board decided to cover the painting instead—hardly a better solution to the supposed offense.

Jon Golinger, executive director of the Coalition to Protect Public Art, an organization dedicated to preserving the mural, said of the decision: “While it is a step in the right direction to take permanent destruction off the table, we will continue to strongly oppose spending $815,000 to permanently wall off the murals so nobody has the choice to see them or learn from them.”

New images covering the original mural, according to School Board President Stevon Cook, will depict “the heroism of people of color in America, how we have fought against and continue to battle discrimination, racism, hatred, and poverty.”

One of the remarkable aspects of this whole debate—besides the fact that a school was seriously considering destroying a piece of art—is the fact that the mural originally was meant to create a less flattering portrayal of Washington.

It was painted in 1936 by artist Victor Arnautoff, a man of the far left in his own time.

According to historian Fergus M. Bordewich, Arnautoff included images of slavery and violence against Indians as a way to present a less glamorized view of Washington. Bordewich wrote in April:

[Arnautoff] included those images not to glorify Washington, but rather to provoke a nuanced evaluation of his legacy. The scene with the dead Native American, for instance, calls attention to the price of ‘manifest destiny.’ Arnautoff’s murals also portray the slaves with humanity and the several live Indians as vigorous and manly.

Those who condemn the murals have misunderstood it, seeing only what they sought to find. They’ve also got their history seriously wrong. Washington did own slaves—124 men, women, and children—and oversaw many more who belonged to his wife’s family. But by his later years he had evolved into a proto-abolitionist, a remarkable ethical journey for a man of his time, place, and class.

So we are now squabbling with the past over exactly how to negatively portray American history. A single misstep or disagreement means erasure.

History must be squeezed and jabbed and manipulated to fit our exact conception of how the present should be; it’s an ethos that exposes the additional problem with the seemingly reasonable suggestions that statues, memorials, and murals be consigned to a museum and given “context.”

The problem is, removing a memorial from its original place already takes it out of context. Worse, the work of art or piece of history—whatever it may be—is increasingly likely to be subjected to hectoring and ideologically blinkered screeds aimed at modern political opponents.

History will take a back seat to ideology.

Perhaps, at the end of the day, we should expect Americans to make the best judgments about history themselves.

That’s not good enough for far-left activists, who are less concerned with creating new monuments to worthy Americans and more interested in seeking out and destroying everything that stands as a proxy for what they hate.

And their hate runs deep.

It seems, especially given what polls suggest about the various statue controversies, most of this movement is being driven by bureaucrats and a relentless faction of other engaged activists rather than the American people as a whole.

Nevertheless, these activists have been effective at pushing their agenda at the national level down to the local level.

Controversies are created where there is none, grievance merchants stay in business, and ideologues who want to deconstruct America to fit their worldview get their way.

It’s ugly business and does nothing to stop racism or end prejudice. If anything, this behavior heightens the politics of sheer power and annihilation.

The message is: Everything we disagree with must be silenced or destroyed; the world must be remade in whatever image we desire—regardless of truth or those who dissent.

What this incident will hopefully elucidate is that the war on history and statues was never simply about history, per se. One can debate the nature of Confederate statues or the merits of individual historical figures marked for destruction, but that misses the larger aims of this movement.

The movement intends to create indelible identities of oppressor and oppressed where “my truth” is more important than “the truth,” and bonds of American solidarity and concepts such as e pluribus unum—out of many, one—are made unworkable.

And that outcome is what Americans of goodwill must oppose at every turn.

As I wrote in May, when this battle over the Washington mural began heating up: “These movements are forcing politics to infect every corner of our existence, and that weakens this country. It makes us more hateful toward one another and trains us in the un-American notion that to win arguments, we must quash, liquidate, and erase from all memory those we disagree with.”

For this reason, we must stand up and defend our shared American history, to oppose the erasure of old statues and monuments, and relentlessly work to bring informed patriotism to generations of Americans who have been stripped of that virtue.