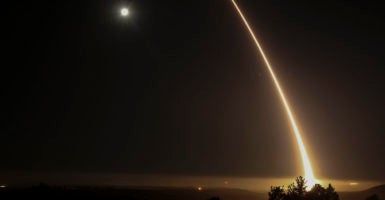 A streak of light trails off into the night sky as the U.S. military test fires an unarmed intercontinental ballistic missile at Vandenberg Air Force Base. (Photo: Ringo Chiu/AFP/Getty Images) 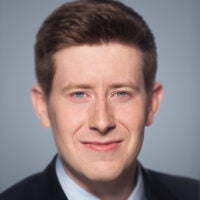 Nathan Royce is a research and administrative assistant for Domestic Policy Studies at The Heritage Foundation and a graduate of the Young Leaders Program.

In late July, Boeing dropped out of the running for the new intercontinental ballistic missile competition. Boeing chose to remove itself with the expectation it will be unable to provide the system at a competitive price.

Nuclear weapons and the missiles that carry them are key elements of the United States’ overall ability to deter major wars.

Near peer competitors are unlikely to risk nuclear attack on America or her allies as long as they know that their aggression could trigger an even greater U.S. retaliation.

This strategy relies on American technology being equal, if not superior, to that of rivals. However, the process by which the U.S. acquires innovative military technology and weapons systems is at risk.

The Ground Based Strategic Deterrent competition, worth $85 billion, is the Pentagon’s program to develop the next generation of ICBMs to replace the Air Force’s aging Minuteman III.

Unfortunately, when Boeing dropped out of the competition, it impacted the U.S.’ ability to obtain this missile system at a reasonable price. Because Lockheed Martin was earlier eliminated from the competition, Northrop Grumman is now the only company in the running to win the contract.

The competition’s perceived lopsidedness stems from Northrop Grumman’s 2018 acquisition of Orbital ATK, one of only two manufacturers of solid rocket motors in the country.

Solid rocket motors are an essential component of a ballistic missile and both Boeing and Northrop Grumman intended to use Orbital ATK in their proposals. Although the Department of Defense extended the deadline for proposals by 60 days, Boeing claimed that alteration did not address its concerns regarding the contract’s inequitableness.

Due to the contract’s inherent structure, Boeing decided the project was no longer a worthwhile investment.

The element of competition between the two companies had been key to the Air Force’s plan to acquire a new design at a low cost, since competition remains a key ingredient in keeping costs down.

Not only has this acquisition taken Boeing out of the competition, Boeing’s elimination may also cement the demise of the only other producer of solid rocket motors in the nation, Aerojet Rocketdyne.

The Ground Based Strategic Deterrent program is likely to be the last missile program awarded for a generation and Aerojet Rocketdyne considers it essential for its survival to participate.

Since Northrop Grumman now has the capability to produce its motors in-house, it is less likely to also involve Aerojet. Orbital ATK’s acquisition has created a potential single point of failure in the supply chain that threatens the future ability of the nation to produce what we need to maintain our nuclear deterrent.

Over time, America’s defense industrial base has shrunk.

Boeing’s decision to forgo competing in the Ground Based Strategic Deterrent program is a symptom of an ever-diminishing number of technology suppliers competing for scarce funding.

The Pentagon and Congress need to pay attention to this situation as this will impact our nation’s defenses.