Interest Matters: How 1 Simple Reform Can Save the Taxpayers Billions 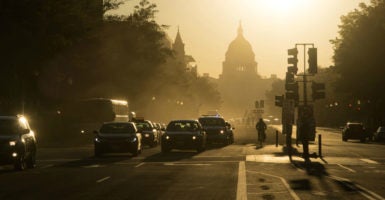 In the wake of last week’s presidential election, Congress is now abuzz with new possibilities. Some of them will require more work than others, but one in particular stands out as an easy win for fiscal conservatives and a reform that could unify both sides of the aisle.

A simple way to reduce deficit spending is to begin including interest costs in legislative cost estimates prepared by the Congressional Budget Office. This measure already has bipartisan support.

As budget deficits swell, so do federal debt and net interest costs. Last year, taxpayers spent $223 billion servicing the national debt. In six years, this amount will double and by the end of the decade, interest payments will cost the federal government $712 billion.

Interest costs are a burden on taxpayers, and lawmakers should consider interest costs when making decisions about the federal budget.

Under current law, before Congress makes a decision about potential legislation reported by a committee, the CBO gives lawmakers a cost estimate of the legislation. The purpose is to inform lawmakers how the legislative proposal will impact the federal budget. This process helps Congress make informed decisions.

But the CBO’s calculations are often flawed.

When lawmakers compare how costs for new legislation will affect the federal budget based on the CBO’s baseline projections, they are not making an exact comparison if they neglect the impact that interest will have on the budget.

To put this into context, imagine you’re one of the 17.5 million Americans who bought a new car last year. If you operated like the federal government and you bought the car on credit, you would have bought the car after looking at the sticker price only. You would not have factored in the interest on your car payments, and therefore would have missed the total amount you’ll actually pay for the car when accounting for loan payments or credit card interest.

Blindly making financial choices without considering the long-term costs is incredibly irresponsible and costly for taxpayers.

But there is a solution. Romina Boccia, Grover M. Hermann fellow at The Heritage Foundation, recently published a backgrounder titled “Improving Accuracy in Congressional Scorekeeping.”

The short paper describes how adding interest costs to the CBO’s cost estimates would increase fiscal responsibility and rein in out-of-control federal spending. When Congress knows what legislation will truly cost, it will be equipped to make the most fiscally responsible decisions.

Not only is this a commonsense fix, this change is something that lawmakers could do immediately. The congressional budget committees must simply request that the CBO include interest costs in all estimates. Rep. Dave Brat, R-Va., recently introduced the Cost Estimates Reform Act of 2015 that would codify this change in law.

This simple reform is made even more appealing by the bipartisan support it could potentially earn. In 2002, William Gale of the Brookings Institution gave testimony explicitly supporting the inclusion of interest costs in cost estimates.

Other organizations across the political spectrum acknowledge the importance of interest costs. The Center for American Progress hasn’t explicitly endorsed adding interest costs to legislative cost estimates, but its scholars have acknowledged the added interest costs from policy proposals on the federal budget.

Taxpayers need long-term fixes to the federal budget that reduce spending, reform entitlements, and rein in the national debt. But accounting for interest in legislative cost estimates is one small step toward meaningful reform and a true win-win.

Lawmakers can make a meaningful and bipartisan reform, and taxpayers will reap the benefits of a more informed and fiscally responsible budget process.