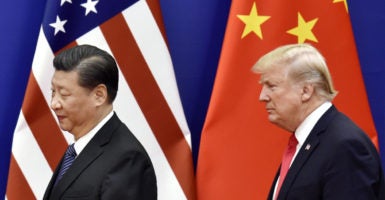 President Donald Trump and Chinese President Xi Jinping at the Great Hall of the People in Beijing, Nov. 9, 2017. (Photo: Kyodo/Newscom)

Since launching the trade dispute with China, the Trump administration has curbed concerns about its tariffs and subsequent retaliation with the mantra “short-term pain for long-term gain.”

President Donald Trump has even gone so far as to call the losers of the dispute, such as American soybean farmers, “patriots” for taking the hit for his poor trade policy, while slipping them billions of dollars to offset losses.

Despite the claims of long-term gain following this dispute, the real story is that long-term damage is imminent. This is the case not only for farmers and manufacturers, however, because ultimately individual Americans foot the bill for higher tariffs.

According to the U.S. Department of Agriculture, “U.S. soybean outstanding sales are below last year, owing to fewer sales to China, which are currently 85 percent below last season.

“Anemic weekly sales and significantly lower outstanding sales indicate that there is not much interest in purchasing U.S. soybeans by China, primarily due to its decision to include soybeans on the list of key U.S. commodities that are subject to retaliatory tariffs,” the Agriculture Department explained.

The biggest story for soybeans, however, is the rapid loss of market share in China. The Agriculture Department estimates that market share for 2017-18 is at roughly 29 percent, its lowest rate in nearly a decade.

Supporters of the current dispute with China claim that farmers can just export more soybeans to other markets, citing recent announcements between the U.S. and the European Union, thereby minimizing the immediate loss of access in China.

The data do not support this assumption. As of now, soybean exports to the rest of the world have not made up for the lost sales to China, and it is unclear whether they will in the future.

American soybean farmers also cite the importance of relationships in their business. Alan Moore, a soybean farmer from Michigan, stated that it’s “really important to meet with our customers and understand their needs, and let them know us.”

Moore emphasized the need for “one-on-one” meetings so that both sides know how important their cooperation is to each other.

When tariffs or other tensions impede the ability of transactions to occur, maintaining those relationships becomes less of a focus. Losses in sales or market share today can mean big trouble in future years if these relationships are also lost to competitors.

American manufacturers, who saw significant benefits from the tax reform package, have received slightly different incentives from the administration. The threat of going to “phase three” with China, coupled with a renegotiated NAFTA and possible tariffs on automobiles and parts, almost strong-arms these businesses into accepting the pain for fear of a larger hit if these threats become reality.

The latest data show that “American businesses paid $4.4 billion in import tariffs [in September], including a $1.4 billion increase in tariffs on products that have been targeted by administration tariff actions.”

The burden for businesses is not just the increased cost of importing, because domestic prices for many of the goods now subject to tariffs, such as steel, have spiked in 2018.

These new costs represent capital that businesses could use to hire new workers, give their employees raises, or increase investment in the company. For some, this strain on capital could mean raising prices, laying off some employees, or in extreme cases, even closing up shop.

The signs of long-term damage for scores of farmers and manufacturers around the country are growing.

It is time for Trump to stop harming the “patriots” in America, eliminate the billions of dollars in new tariffs, and seek alternative means to address trade disputes with China.