Red States Could Lose Big Because of the Census, Rep. Mo Brooks Explains 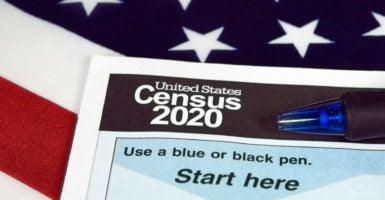 "You are diluting the vote of American citizens when you count illegal aliens for the purposes of distribution of political power," says Rep. Mo Brooks, R-Ala. (Photo: Getty Images)

Is it fair to distribute Electoral College votes and congressional seats by counting all people, not just citizens? Rep. Mo Brooks, R-Ala., is suing the federal government because he thinks Alabama will be hurt because of the current methodology of the census. Read his interview, posted below, or listen on the podcast:

Daniel Davis: Alabama is suing the federal government over whether illegal immigrants should be counted in the census. The outcome will have real political ramifications for Alabama and other states.

And today we’re joined by one of the plaintiffs in that lawsuit. None other than Congressman Mo Brooks who represents Alabama’s 5th Congressional District.

Congressman, thanks for being with us today.

Davis: Congressman, before we get into the lawsuit specifically, I’d like to ask your response to the president’s executive order last week after the Supreme Court pretty much blocked off his path to adding the citizenship question to the census.

He issued an order to the executive branch to gather as much information as it could piecemeal on citizenship. What’s your reaction to the president’s move there?

Brooks: I have mixed reactions. First, it’s unfortunate that the Supreme Court botched it in the way in which the Supreme Court chief justice drafted his opinion, which in effect barred the asking of the citizenship question on the census. A question that has been asked far more often than not.

It’s also unfortunate that the Trump administration, whoever it was that actually was involved in this process, I suppose a lower echelon person botched it by talking about improper motivations for asking a citizenship question.

Had the Trump Administration done it right and focused on what are legal motivations, then I believe we would have the citizenship question on the census.

So that’s kind of the mixed reaction side of it.

On the plus side, you’ve got the executive order that’s going to try to determine how many illegal aliens there are in each state, which is fundamental to making sure that we have a proper dispersal of congressional seats, and Electoral College votes based on people who are lawfully within the United States, not based in part on people who are illegally here.

Kate Trinko: Tell us about the lawsuit that you and the state of Alabama are bringing on this question.

Brooks: Sure. You’ve got anywhere from 11 million illegal aliens in the United States, according to the 2010 census, to maybe 22 million. If you believe a recent Yale University study.

Well, if you’ve got 22 million illegal aliens in the United States of America, then you’re looking at roughly 30 congressional seats and Electoral College votes that are being allotted based on the count of illegal aliens rather than American citizens.

So in effect, you’re diluting the influence of American citizens over their own government.

You’re also, and this is part of the lawsuit, you are adversely affecting the “one man, one vote” principles that are enunciated in the 14th Amendment to the United States Constitution that require congressional seats after reapportionment by way of example to be perfectly equal in population with maybe a fraction of a percentage point deviation.

And so, that dilution of the vote by the counting of illegal aliens in my judgment is unconstitutional because it violates one man, one vote principles.

Trinko: And how do you see Alabama specifically being hurt by this?

Brooks: The odds are that the state of Alabama will lose a congressional seat if illegal aliens are counted nationally.

Notably, there tends to be a shift to the socialist democrat states and away from states that are predominantly made up of American citizens, which in turn have a better understanding of the foundational principles that have made America a great nation, which in turn means that those states that are losing congressional seats and losing Electoral College votes, if you count illegal aliens, more often than not, they’re red states.

Davis: That seems like pretty straight forward policy to count the people in your apportionment count that are actually going to be voting legally. But I guess the policy argument could be different from the legal argument. You’ve argued that this is also unconstitutional. Could you explain that for us?

Brooks: It’s unconstitutional under the 14th Amendment, one man, one vote principles. And you are diluting the vote of American citizens when you count illegal aliens for the purposes of distribution of political power. That political power being congressional seats on the one hand and Electoral College votes on the other.

And in effect what that does over the long haul is it steals from American citizens the ability to govern their own governments.

Now, we’re not the United Nations. We’re the United States. I’m not sure if you’re aware, but there are probably about a dozen Democrat-controlled cities that have made it lawful to register to vote even if you’re not an American citizen. Makes no difference if you’re a lawful immigrant or an illegal alien.

The largest such city that allows illegal aliens and noncitizens to register to vote and vote is San Francisco. So, that gives you an idea of where the socialist democrats want to take us as a country.

Trinko: I have to say, I grew up near the insanity in San Francisco and it’s amazing to see firsthand. … Speaking of craziness, have you spoken to any liberals in Alabama? Have you spoken to any Democratic colleagues? Is there any sympathy for this argument from unexpected quarters?

Brooks: I have not spoken to any Democrats in the state of Alabama who are familiar with the national Democratic Party’s goal of allowing noncitizens and illegal aliens in particular to participate in American elections.

Right now it’s limited theoretically to municipalities, but with a wink-wink and a nod-nod, you have to wonder how many of those illegal aliens or lawful immigrants, both of whom are noncitizens when they show up with their voter registration card, are allowed to vote in state and federal elections.

Davis: Currently, under the current apportionment count, legal noncitizens are also being included in that. Correct?

However, the Alabama lawsuit is limited to the most egregious of those two groups and those are illegal aliens who should not even be here. Whose first act on our soil was to spit on our laws and our Constitution.

Trinko: So, what’s next for this lawsuit?

Brooks: We’re waiting for the proceedings to develop to the point where a federal district judge in Birmingham will be able to render an opinion.

Most of the issues are legal in nature, although there is also some factual issue and that comes down to whether Alabama will lose a congressional seat, as we believe, if illegal aliens are counted for the purposes of distribution of federal government political power.

Davis: It seems like this is something that other states would really have a big stake in as well.

I’m using that as a generalism. It’s not always that way.

By way of example, Texas is probably a net gainer when you bring in illegal aliens in the count for the purposes of reapportionment of congressional seats and Electoral College votes. California is a huge gainer. … Probably Illinois, New York. They’re gainers. A state like Alabama, a state like Ohio, South Carolina, perhaps. A number of red states in the heartland of America, they tend to be the net losers if we count illegal aliens.

Davis: It’s a lawsuit with very real political ramifications. And congressman, we appreciate you coming in and talking about it with us.