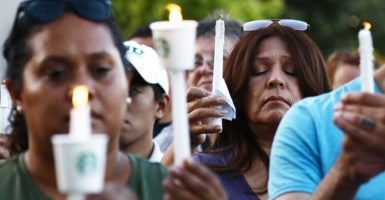 A vigil is held July 29 for victims of the shooting at the Gilroy Garlic Festival in Gilroy, California. (Photo: Mario Tama/Getty Images)

The shooter who killed three and injured 13 in Gilroy, California, was exploring “violent ideologies” and had a “target list,” the FBI says.

Bennett added: “Even though the threat appears to have been mitigated by the subject’s death, the FBI has a responsibility to notify individuals and organizations of potential threats or acts of violence. We are in the process of notifying those groups.”

Bennett said the bureau will open a “full domestic terrorism investigation” into the July 28 attack after the discovery of the target list.

The 19-year-old shooter, whom the FBI previously described as “kind of a loner,” killed 25-year-old Trevor Irby, 13-year-old Keyla Salazar, and 6-year-old Stephen Romero before turning his AK-47 rifle onto himself at a popular food festival.

“We all knew of him,” a witness who went to the same school as the shooter told reporters. “He graduated last year, I believe. Nothing really out of the ordinary, you would think.”

The Gilroy shooting came just a week prior to two other mass shootings that took place Saturday at a Walmart in El Paso, Texas, and early Sunday in a nightlife section of  Dayton, Ohio. The El Paso death toll rose to 22 Monday, and the Dayton shooting left nine dead.