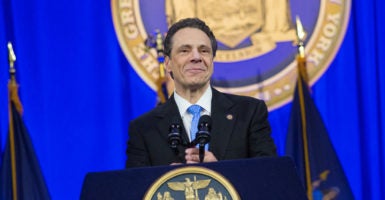 New York Gov. Andrew Cuomo, a Democrat, has signed into law a bill to bar school districts from arming teachers as a way to combat school shootings.

Cuomo signed legislation that prohibits school districts from granting permission to teachers or nonsecurity personnel to carry a firearm on school grounds, the governor’s office announced.

“The answer to the gun violence epidemic plaguing this country has never been and never will be more guns, and today we’re expanding New York’s nation-leading gun safety laws to further protect our children,” Cuomo said in a prepared statement.

School employees such as resource officers, law enforcement, or security personnel will still be able to carry a gun on school grounds.

The law comes in the wake of discussions in school districts across the country about arming teachers as a safety measure against school shootings.

The Parkland, Florida, shooting in February 2018 left 17 dead and led to state lawmakers passing legislation to allow teachers to carry guns at school, according to The Washington Post.

“These measures will help slow the proliferation of guns by keeping unneeded firearms out of school zones and helping to ensure unwanted or illegal guns don’t fall into dangerous hands,” Cuomo said.

The legislation is the third gun control measure signed into law this week, according to The New York Times.

On Tuesday, he signed a bill to ban undetectable guns like those made by 3D printers, and expanding safe gun storage laws.