Rep. Rashida Tlaib Gets Donation From Developer Who Died in 2009 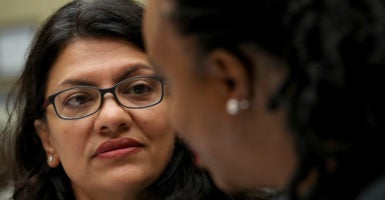 “It is illegal to make a campaign contribution in the name of another person,” good-government activist Kendra Arnold says. Pictured: Rep. Rashida Tlaib, D-Mich., listens July 12 during a House Oversight and Reform Committee hearing in Washington. (Photo : Win McNamee/Getty Images)

Rep. Rashida Tlaib, D-Mich., received a $2,500 donation from a man who died more than a decade ago, public records show.

Michigan businessman and real estate developer George S. Farah Sr., who emigrated from Palestine to the United States in the mid-1950s, donated $2,500 toward Tlaib’s election, according to campaign filings. Farah died Feb. 1, 2009, according to Michigan Live.

“Gisele Farah is the sole beneficiary of a trust in her late husband’s name, George S. Farah Sr.,” Tlaib’s office said in a statement to the The Washington Free Beacon, which first reported the contribution to the Democrat from the dead man.

As the sole beneficiary in control of the trust, [Farah] contributed to our campaign with funds from her trust. We will amend our campaign records and filings to clarify that the campaign contribution was from Gisele Farah and should be designated under her name.

The address listed with the campaign contributions is the same as one appearing with Farah’s name in public records, along with that of his widow.

“It is illegal to make a campaign contribution in the name of another person and a campaign must ensure all donor information is reported accurately,” Kendra Arnold, executive director of the Foundation for Accountability and Civic Trust, told the Free Beacon.

“The requirement of accurate disclosure of campaign contributors is important to inform voters of the source of campaign funds, prevent corruption, and ensure individuals are contributing within the legal limits,” Arnold said.

Additionally, Rep. Dan Kildee, D-Mich., received $1,400 in donations in Farah’s name between 2011 and 2017. Kildee is the only other politician who has received donations in that name.

A spokesman for Kildee provided a statement to the Free Beacon that is similar to the one from Tlaib’s office.

“Gisele Farah is the sole beneficiary of a trust in her late husband’s name, George S. Farah Sr., who passed away in 2009,” a spokesman for Kildee said in a statement to the Free Beacon, adding:

Since his death, Gisele Farah, as the sole beneficiary in control of the trust, has contributed to the [Kildee] campaign with funds from her trust. Our campaign’s records have been amended to clarify that the campaign contributions were from Gisele Farah and should be designated under her name.

Prior to his death, records show, Farah did not donate any money to candidates for federal office.