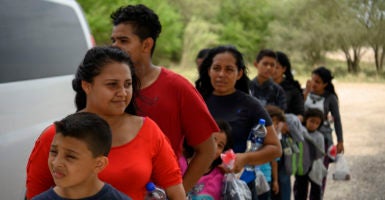 The latest findings from the Gallup polling organization make 2019 the year with the highest mentions of immigration as a big concern. Pictured: Migrant families wait June 21 in McAllen, Texas, for transport in an area that U.S. Border Patrol agents use to quickly check health and identification information and to provide snacks, diapers, and water. (Photo: Carolyn Van Houten/The Washington Post/Getty Images)

July saw a record high of Americans who identified immigration as “the most important problem” facing the United States, according to a new poll.

The Gallup polling organization first noted the increased number of immigration mentions from those polled reaching its highest point in June at 23%, but July broke that record with mentions climbing to 27%.

These findings make 2019 the year with the highest mentions of immigration, which first began in 1993, Gallup said. Since then, an average of 6% of Americans have mentioned the issue.

The latest polling, Gallup said, stems from the U.S. government’s continued attempts to manage the influx of Central American immigrants crossing the U.S.-Mexico border. Gallup attributed the historic uptick to the “dramatic images of overcrowded detention centers” and descriptions of the situation as “a crisis” by representatives of both major political parties.

Despite differences on how to solve that crisis, Congress and President Donald Trump worked together to enact legislation in June adding more than $4 billion with the goal of alleviating problems at the border. The legislation included support of migrant children held in U.S. custody.

Though the public acknowledges immigration as a top issue weighing on the country, Gallup’s poll found that 76% say legal immigration is a good thing for the country—the highest figure for the question since Gallup starting asking it in 2001. This compares with 19% this year who say it is a bad thing.

Coming in as the second most important problem facing America, according to Gallup, is “the government/poor leadership,” with 23% mentioning it.