The Sneaky Way the Government Is Growing the Number of Bureaucrats 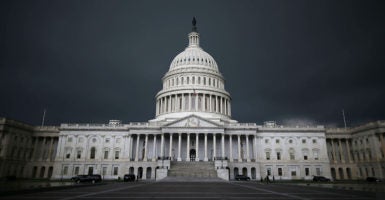 Today, there are about 3.7 million federal contractors—almost twice as many as there were in the 1960s. (Photo: Mark Wilson/Getty Images)

To constrain the growth of central government, conservatives have fought to keep down the number of federal bureaucrats.

This strategy has failed.

Since the 1960s, the number of federal employees has remained constant at about 2 million, yet federal power has greatly expanded.

This phenomenon arises because Washington has outsourced many civil service functions to contractors, nonprofit groups, and lower levels of government.

According to New York University professor Paul Light, the true size of the federal government’s “blended workforce” is now somewhere between 7 million and 9 million people.

These contractors fill a wide range of functions: security in war zones, statistical analyses, janitorial services, management consulting, and almost everything in between. Many of these functions were once performed by the largely blue-collar federal workforce of the mid-20th century.

In addition to government contractors, a large portion of the nonprofit sector exists to execute federal policies. In fact, federal grant money is the primary source of income for about 1.6 million nonprofit workers.

These salaries are underwritten by the $235 billion the federal government lays out to nonprofits each year. This money funds everything from Head Start and foster care to health clinics and financial literacy programs.

While conservatives focus on the long-term goal of rolling back regulations and reining in federal spending, they must also grapple with the dangers of handing over the public’s business to nonprofits and private companies.

While private citizens can demand unclassified documents from federal agencies, they cannot make such requests of Deloitte or Raytheon. Their operations are far less transparent, even if their processes are much more efficient.

It’s not even clear which companies are receiving federal dollars. According to a 2014 report by the Government Accountability Office, only 2% to 7% of grant and contract awards on the website contained information that was fully consistent with agency records.

Federal reliance on state and local governments is no less problematic. State governments have become increasingly reliant on grant money from the federal government, which gives Washington tremendous leverage.

Conservatives have focused on the waste, fraud, and abuse of public-sector employees for decades, and for good reason. But it’s time to widen the focus to private-sector companies, nonprofits, and state and local governments.

There needs to be far more transparency regarding who is doing the federal government’s work, at what expense, and to what end.

As of now, some of the murkiest parts of the D.C. swamp lie outside the federal bureaucracy’s marble walls.

The last four decades have demonstrated that big government has to be confronted head-on. Starving the beast does not work. Just as cutting revenues led to runaway deficits, rather than forcing the government to live within those straitened means, capping labor gave birth to the blended federal workforce.

The federal government has proven to be quite resourceful in terms of finding ways to meet the public’s demand for expensive programs and paternalistic protections.

Change will have to come from the bottom-up, not the other way around.