How Technicalities Ended the Census Case 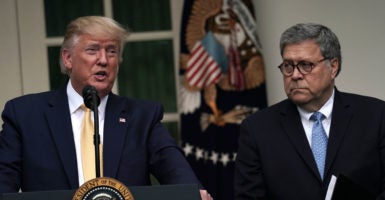 Speaking from the Rose Garden on Thursday, President Donald Trump and Attorney General William Barr accepted that they couldn’t put the citizenship question on the 2020 census.

Barr said that the administration would have won the lawsuits, but that “logistical impediments” made it impossible to win the cases in time for the census.

For two examples of these logistical impediments, have a look at these unusual orders by Judge Jesse Furman and Judge George Hazel, who are overseeing the census lawsuits. In their orders, they ruled that the Department of Justice can’t use the lawyers of its choosing unless they comply with legally dubious requirements.

Last month, the Supreme Court blocked, at least temporarily, the Commerce Department from adding the citizenship question to the census because it suspected Commerce Secretary Wilbur Ross’ stated reasons for doing so had been “contrived.” It sent the case back to the lower courts to investigate that issue.

When the case got back to the lower courts, the Department of Justice attorneys representing the government defendants initially said they were giving up the fight and that the Commerce Department would begin printing the census forms without the citizenship question. But the president quickly reversed course and vowed to find a way to comply with the Supreme Court’s opinion.

Shortly after that, the defendants filed motions to substitute the lawyers in the case for other Department of Justice lawyers.

In two similar opinions that make little sense, Furman and Hazel, both Obama appointees, said no.

Furman ruled that the motion to substitute was “patently deficient” because the defendants provided no reasons for the substitution. Hazel called Furman’s order “well-reasoned” and said he was concerned that changing lawyers would “disrupt the orderly administration of justice.”

For one thing, the local rules apply with greatest force only when a lawyer tries to abandon his client in the middle of a case.

To the extent they apply to a substitution, they are concerned only that the substitution will not delay the proceedings. That makes sense because the rule primarily exists to protect litigants from being left in the lurch by irresponsible lawyers.

But the lawyers here weren’t trying to abandon the case and leave their client in the lurch. The government—the client—simply wanted to substitute one set of lawyers with a different set of lawyers.

In short, the judges have twisted a rule meant to protect litigants from bad lawyers into one that forces litigants to keep lawyers they don’t want.

What’s more, there’s no legitimate concern that switching one team of lawyers with another will delay the case.

This is the Department of Justice. It has a small army of lawyers devoted to this case, any of whom are ready to stand in at a moment’s notice, and all of whom are intimately familiar with the ins and outs of the case.

But even if these local rules applied to a substitution, the only “satisfactory reason” the government (or any litigant for that matter) needs to swap lawyers is: “Because I want to.” Litigants have a right to the lawyers of their choice.

In that regard, Hazel’s order is on even shakier ground than Furman’s because the local rule he relies on doesn’t require any reason, much less a “satisfactory” one.

Despite the legal dubiousness of these orders, the government has been forced to give up the courthouse fight to add the citizenship question to the census.

One way or another, the government will do what for most of the country’s history has been both routine and uncontroversial: counting the number of American citizens.