US-UK Relationship Will Be Just Fine Despite Leaked Cables 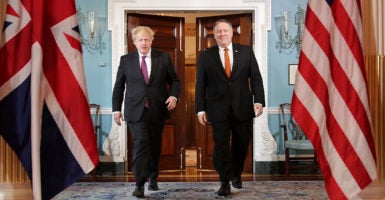 The resignation this week of the British ambassador to Washington has made headlines on both sides of the Atlantic.

Sir Kim Darroch resigned following the publication of leaked diplomatic cables that revealed he had been sharply critical of the Trump administration, calling it “inept” and “chaotic.”

President Donald Trump condemned Darroch’s negative comments, prompting the British government to issue a defense of its representative in the United States.

The events of the last few days highlighted tensions that already existed between the Trump White House and Theresa May’s Downing Street, especially over the prime minister’s handling of Brexit negotiations with the European Union, which the U.S. president has described on several occasions as highly ineffective.

The diplomatic spat has prompted media commentators in both America and Europe, often in hysterical terms, to pronounce that the U.S.-U.K. partnership is dying and irreparably damaged.

In the words of The Washington Post’s Dan Balz, the special relationship “is in tatters.”

Some have also suggested the leaks will have a chilling effect on other foreign diplomats in Washington, with ambassadors now too afraid to report back to their governments in a candid manner.

As is often the case with over-hyped media speculation, the reality will be very different.

The British government is conducting a widespread investigation into the leaks and will be taking steps to ensure this kind of incident doesn’t happen again, or at least will be far less likely. Other major U.S. allies will probably take similar steps.

European Ambassadors to Washington, from Paris to Berlin, will no doubt continue to deliver frank assessments of U.S. policy back to their capitals.

The art of diplomacy will continue to be conducted as it has been for hundreds of years—with ambassadors to Washington sometimes giving unflattering assessments of U.S. administrations in communications back home.

As for the special relationship, which primarily revolves around defense, intelligence, and economic ties and has been in place for over 75 years, it isn’t going away.

The U.S.-U.K. alliance remains the most powerful and effective bilateral partnership in the modern era, and it’s about to get even stronger.

On July 24, Great Britain will have a new prime minister, and according to the latest polls, it’s highly likely to be Boris Johnson. The former foreign secretary and twice-elected mayor of London was born in New York and was, until very recently, a dual U.S. citizen.

If he becomes prime minister, Johnson will be one of the most pro-American leaders ever to take the reins of 10 Downing Street.

Johnson has already developed a strong rapport with Trump, and his new British administration that will work very closely with the U.S. government on a range of issues, from preventing the rise of a nuclear-armed Iran to standing up to the Russian bear.

And, unlike May, Johnson is an ardent Brexiteer who has pledged to deliver Brexit on Oct. 31, with or without a deal with the EU.

With Johnson as prime minister, we can expect a U.S.-U.K. free trade deal to be in place by next year. The United States and Great Britain can look forward to a reinvigorated alliance when the new prime minister comes in.

The free world is a better and safer place when Britain and America stand shoulder to shoulder, and the sure arrival of Brexit later this year will further enhance the strong ties that already bind our two great nations, which share a common heritage, culture, language, and love for freedom.