America’s First Black Billionaire Says His Party Is ‘Too Far to the Left,’ Praises Trump Economy 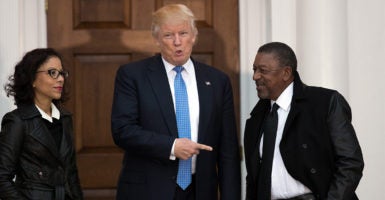 An unexpected critic of the Democratic Party known as America’s first African American billionaire says the party is becoming too liberal, and shared his straightforward commendation for President Donald Trump’s economy.

“The party, in my opinion, for me personally, has moved too far to the left,” said Robert Johnson, founder of the cable network Black Entertainment Television and RLJ Companies, during a Tuesday interview with CNBC’s Hadley Gamble.

A self-proclaimed Democrat and centrist, Johnson, 73, went on to say, “And for that reason, I don’t have a particular candidate [I’m supporting] in the party at this time. I think at the end of the day, if a Democrat is going to beat Trump, then that person, he or she, will have to move to the center and you can’t wait too long to do that.”

“I think the economy is doing great, and it’s reaching populations that heretofore had very bad problems in terms of jobs and employment and the opportunities that come with employment … so African American unemployment is at its lowest level, ” Johnson said.

Johnson criticized the American political establishment in his CNBC interview as “very wicked and very mean,” but praised Trump for helping the African American community.

“I give the president a lot of credit for moving the economy in a positive direction that’s benefiting a large amount of Americans,” he said. “I think the tax cuts clearly helped stimulate the economy. I think business people have more confidence in the way the economy is going.”

“Overall, if you look at the U.S. economy … you got to give the president an A+ for that,” he added.

When asked about Trump’s style being considered as divisive by many Americans, Johnson responded, “A lot of people are not going to like that style, but, when he says he’s going to try to do something economically, you have to give him credit for taking some specific steps to do that.”

“At the end of the day, the American people are looking for someone who can deliver economically and deliver on opportunities,” he added.

Johnson reportedly favored Hillary Clinton during the 2016 presidential race, but the media mogul met with Trump after his victory to discuss what he referred to as “business solutions to social problems,” and encouraged African Americans to give the new president “the benefit of the doubt.”

Johnson has voiced criticisms of both former President Barack Obama andClinton in the past.