What Did the US Gain From the Trump-Xi Meeting at the G-20 Summit? 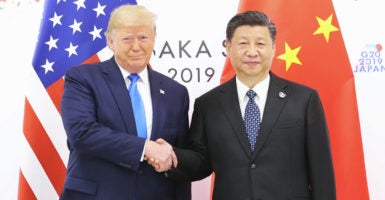 The world held its breath in anticipation as President Donald Trump met with Chinese President Xi Jinping on June 28 on the sidelines of the Group of 20 leaders’ summit in Osaka, Japan.

The outcome of their meeting was mostly unsurprising, despite conferring for almost an hour.

By the end, the two agreed to resume negotiations toward ending the U.S.-China trade war.

Trump agreed to hold off on levying new tariffs on $300 billion worth of goods Americans buy from China. According to the president, they also discussed Chinese purchases of U.S. agricultural products and student exchanges.

That has unsettled the national security community.

While we’re still missing a lot of details from what was actually agreed upon during the Trump-Xi meeting, the outcome was essentially what I predicted the same day as the meeting itself; namely, that they would agree to another trade war truce.

For now, it’s good to know there won’t be another tax increase on Americans who buy goods from China, but companies and consumers will still have to pay for the existing 25% tax on $250 billion worth of goods from China until a deal is done.

There’s still no indication when we can expect to see a deal. Given how close the two sides were to making a deal just recently, I think we could see a deal before the end of the year.

On Monday, Trump reiterated that he wants to make a deal with Xi, and that he thinks Xi wants a deal, too.

In Washington, we often hear questions about who wants the deal more, Trump or Xi.

At the end of the day, that kind of question is unproductive, since it’s mostly a political one, and the politics in Washington are different than the politics in Beijing. It’s like the proverbial comparing of apples and oranges.

For example, when it comes to U.S. politics, the White House continues to describe any deal with China as a trade deal. Trump doesn’t want to call it anything else, partly, no doubt, because he has campaigned as a deal-maker.

I briefly explain here why any deal with China is not a trade deal, in the traditional sense, but more an executive agreement over U.S. economic interests within China.

In China, Xi doesn’t need to worry about elections, only about keeping other members of the Communist Party happy.

To the extent the question of who wants a deal more is an economic question, it is in the interest of both countries to reach an agreement. The current impasse is doing no one any good.

So, what did the U.S. really gain from Trump attending the G-20 and meeting with Xi? My colleague, Jim Roberts, recently wrote about whether these G-20 summits are even really worth the effort at all.

But progress in U.S.-China trade talks is still progress. The sooner there’s a deal between the U.S. and China, the sooner Americans can expect to see tariffs lifted and another huge tax cut.

That’s because there are ways to deal with China other than increasing taxes on Americans. I’ve previously laid out a number of options the U.S. can take when dealing with China.

Because of U.S. tariffs, over the past year, Americans have paid roughly $5 billion a month in additional taxes.

And as Trump likes to say, that’s billion with a “b.”