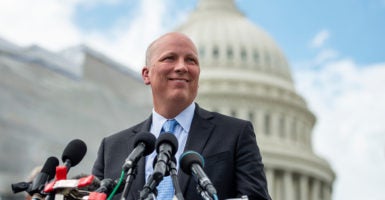 A memo released late last week by the Conservative Action Project recognizes freshman Rep. Chip Roy, R-Texas, and “other House conservatives” for holding all House members accountable for their voting record and pressuring members to address the border crisis.

“During efforts to consider spending bills that collectively total over a trillion dollars, Rep. Roy rejected business as usual, and required Members of the House to go on record with their positions by casting actual votes—instead of shirking their duties and going on recess to avoid dealing with the border crisis,” the memo reads.

Roy has also “stood up for accountability” by exposing “the hypocrisy of  Democrats who were blocking the Trump administration’s request for funding at the border, in the midst of this crisis,” according to the group’s memo.

The congressman kept the House in session earlier this month until 4 a.m. by demanding debate and roll call votes on over $1 trillion in federal spending to spark attention to funding for the immigration crisis at the border.

Roy and his “brave colleagues” received praise in the memo for successfully getting members of the House to vote on “over 100 amendments.”

The Senate has since authorized a $4.6 billion emergency spending bill Wednesday, according to The Washington Post, aimed at addressing the immigration crisis at the United States-Mexico border after a photo surfaced of a deceased father and daughter who drowned crossing the Rio Grande to enter into Texas.

Will Democrats act? It’s not enough, to be clear, to throw $4.5BB in funding that doesn’t actually solve the problem and hamstrings Border Patrol and ICE from doing their job. #EndBorderCrisisNow https://t.co/a3HNNGO0Hr

This isn’t the first time Roy has saved taxpayer money. While Congress was in a weeklong recess, Roy showed up to an empty chamber last month and blocked the passage of HB 1214, a $19.1 billion supplemental spending bill that would have otherwise passed, by refusing a unanimous consent vote.

“I’m here today primarily because if I do not object, Congress will have passed into law a bill that spends $19 billion of taxpayer money without members of Congress being present in our nation’s capital to vote on it,” Roy said on the House floor.

The bill eventually passed on June 3.

The Conservative Action Project was founded “to facilitate conservative leaders working together on behalf of common goals.”

Roy is a member of the conservative House Freedom Caucus, and formerly worked as chief of staff for Sen. Ted Cruz, R-Texas. Roy won his House seat in November, replacing Republican Lamar Smith.

“We applaud Rep. Chip Roy and these House conservatives for standing up for their—and our—principles—and drawing attention to the border crisis—even in the face of scorn and disdain from their colleagues who preferred to duck their obligations to the American people,” reads the memo.

The memo concluded by crediting Roy for setting a “courageous” example for Congress. “Accountability is never an inconvenience,” it stated. “Transparency should never be dismissed as unimportant.”

The memo was backed by an extensive list of influential conservatives.

Among those who endorsed it include: Edwin Meese, former attorney general under President Ronald Reagan; Jessica Anderson, vice president of Heritage Action for America; Matt Schlapp, chairman of the American Conservative Union; Amy Kremer, chairwoman of Women for Trump; Belden Bell, a Legacy Society co-chair at The Heritage Foundation; and Peter Thomas, the chairman of the Conservative Caucus.