Congress Examines Welfare Reform: ‘The Most Effective Anti-Poverty Program Is a Job’ 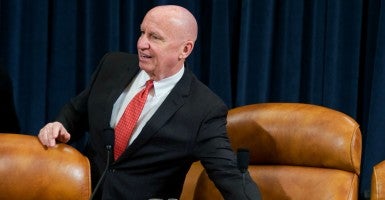 For the first time in a decade, the House Ways and Means Committee held a full committee hearing on welfare reform, addressing how to get low-income Americans out of poverty.

“Today’s hearing is about people, and right now there are more than 46 million people in our nation who are living in poverty,” Committee Chairman Kevin Brady, R-Texas, said.

“All of us are here because we want the same thing: to help as many families as possible escape poverty as quickly as possible,” Tarren Bragdon, CEO of the Foundation for Government Accountability, testified at the hearing on Tuesday. “The best way to do this, and to solve many of the other challenges welfare programs currently face, is through a simple but powerful tool that must be core to any welfare reform conversation: work.”

In his testimony, Bragdon used two states as examples, Kansas and Maine, that have restored work requirements for welfare programs. In Maine, “Thousands of able-bodied adults leaving food stamps found jobs and increased their hours, leading their incomes to rise by 114 percent on average. And in both states, that higher income more than offset the food stamps they lost, leaving them better off than they had been on welfare,” Bragdon said in his written testimony.

“It turns out work works,” Bragdon said. Bragdon testified that work requirements for able-bodied adults would likely deal with much of the fraud happening in the welfare system. He said:

Here’s another really important thing to consider: this reform frees up limited resources to help the truly needy, including the more than 600,000 Americans who have intellectual disabilities or are in frail health waiting for Medicaid waiver services.

“Decades of experience tells us the most effective anti-poverty program is a job,” Committee Chairman Brady said. “Yet of those who are working-age and in poverty, nearly two in three are not working, many of them not by choice, but in large part because of the welfare system.”

Olivia Golden, executive director at the Center for Law and Social Policy, testified before the committee that work requirements are “counter-productive” in welfare reform.

“Given the large share of low-income families who are already employed yet still need help making ends meet, along with the many barriers to steady work in the low-wage labor market, the best evidence suggests that so-called ‘work requirements’ are not effective strategies for increasing work hours and earnings,” Golden said in her written testimony.

According to the Foundation for Government Accountability, the number of able-bodied adults on food stamps has dropped 75 percent in Kansas since the state implemented reform in 2013.

“Work eliminates poverty. The research is very, very clear on that,” Bragdon said.

On Tuesday, the Ways and Means Committee passed two bills related to the Temporary Assistance for Needy Families (TANF) program that provides assistance to families in need.

“These bills are part of a commonsense package of proposals to ensure TANF – one of the nation’s most important anti-poverty programs – effectively spends taxpayer dollars to help those most in need,” a blog post from the committee says.

Robert Rector, a senior research fellow at The Heritage Foundation, says the legislation “undermines work requirements” in the TANF program.

“Rhetoric aside, the Ways and Means Committee legislation actually undermines work requirements in TANF,” Rector, who played a key role in writing the original TANF legislation twenty years ago, told The Daily Signal. “A key principle of workfare is that parents who refuse to participate should have their  welfare checks halted. Ironically, the legislation financially penalizes states for doing this. The bill shifts from the successful ‘work first’ strategy embodied in the original law to a social service and training model that has a very long history of failure.”