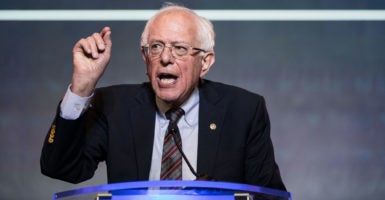 On Monday, Sen. Bernie Sanders, I-Vt., desperate to revive his flagging campaign, proposed a far-reaching plan to wipe out all student debt.

Sanders tweeted: “Are you truly free if you graduate hundreds of thousands of dollars in debt? Are you free if you cannot pursue your dream because you don’t make enough to cover your student loan payments? We will #CancelStudentDebt because there is no freedom without economic freedom.”

This is an Orwellian redefinition of the term “freedom.”

Freedom has traditionally meant the ability to make your own decisions—and to live with the consequences of those decisions. I am free to buy a Lamborghini on credit, if Visa will extend me that credit; I am not deprived of freedom when Visa comes calling with a bill.

But Sanders’ rhetoric here is merely the latest in a long line of such redefinitions from the American left.

Franklin Delano Roosevelt suggested that “true individual freedom cannot exist without economic security and independence”—and proceeded to make more Americans dependent on government than ever before in American history.

He declared “freedom from want” in January 1941, in the midst of a second Great Depression of his making—the prior year, the unemployment rate in the United States was 14.45%.

The mere declaration, as it turned out, did not end want. And the redefinition of freedom as government-sponsored dependency did not end in prosperity or freedom.

That’s mainly because the human heart will always embrace the notion that our shortcomings spring not from choice but from circumstance. Sometimes that’s true. But in a free country, it’s far more often untrue.

Still, that notion relieves us of responsibility while making demands of others. After all, if freedom lies in lack of college debt, then those who demand that you pay your debts are curbing your freedom.

In reality, here’s what the #CancelStudentDebt plan would do: continue to drive up the cost of college tuition, with the taxpayer footing that cost.

That’s precisely what has happened in the past few decades as the feds have involved themselves in the supposedly vital task of ensuring that everyone goes to college.

Never mind that many people don’t need to go to college—that coming out of college without a skill set but with hundreds of thousands of dollars in debt is a bad bargain.

And carefree doesn’t mean free. It simply means that someone else may be taking responsibility for your decisions. My children are carefree; they’re certainly not free.

Going to college is often seen as an important step toward adulthood. Responsible financial decision-making is a far more important step. Disconnecting the two just continues the infantilizing of American adults. But that’s all part of Sanders’ agenda, isn’t it?