The Possible Upsides of Korea Crisis 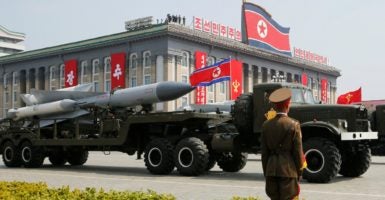 Not only is the current showdown with North Korea unlikely to lead to a military conflict, it is likely that all the countries involved will walk away believing they have achieved something for their side. In fact, it could be the perfect storm of crisis diplomacy that’s a win-win for everybody—for now.

Pyongyang gets the world’s attention. Kim family diplomacy requires that the world see its regime as a dangerous, unpredictable menace. Otherwise, why would anybody care to deal with the world’s poorest nation at the far end of the planet?

Usually the annual military parade gets no more attention than a joke on the late-night shows. This time around, Kim Jong Un’s half-serious salute got worldwide coverage. The question for Kim is how to parlay fear-mongering into some kind of strategic advantage.

Seoul and Tokyo got a big reassurance of commitment from Washington, as the U.S. rushed to show both that we’d honor our obligations to mutual defense. Nothing says we care like an armada of ships and a fleet of nuclear-capable bombers.

Beijing used the crisis to establish a rapport with the new U.S. president. Rather than stiff-arm President Donald Trump or play rope-a-dope, President Xi Jinping adopted a let’s make-a-deal attitude.

Washington got to look strong, too. In a little over a week, Trump met with top foreign leaders, including Xi, dealt with the situation in Korea, and handled a crisis in Syria. For a fledgling administration led by a president with little foreign policy chops, that was a damn decent performance.

That Trump navigated through the crisis, so far, so well is a hopeful indicator that he will deliver a mature and responsible foreign policy. Indeed, signs point in that direction.

By giving all the players involved enough space to save face, Washington helped defuse rather than escalate the crisis.

The question is: Where do we go from here?

Getting through the day without starting World War III doesn’t solve the threat of a nuclear-armed North Korea. The White House needs a sustained responsible policy. The Chinese are not going to solve the problem. Kim is never going to voluntarily give up his nukes.

Just talking will get us nowhere. What is needed is a serious long-term plan that might create future opportunities for de-escalation, something Heritage Foundation expert Bruce Klingner was pressing for even before the crisis started.

The good news is that Trump has weathered the challenge so far. The administration is following the right playbook: maximum pressure but not regime change.

But there is more to be done.

For sure, the U.S. needs to send clearer signals that it is not planning to ratchet up tensions.

While the announced part of the next-step policy seems good, the sanctions portion, including enforcing existing U.S. law, might well be put on hold pending action by China. It’s a problem that China always underperforms on its promises. Trump should not wait long for Beijing to deliver before really turning up the heat on sanctions.