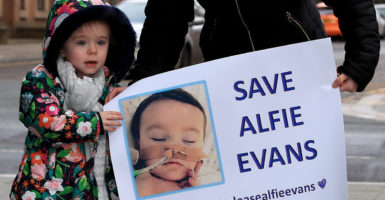 A young girl stands with a supporter of Tom Evans and Kate James, the parents of 20-month-old Alfie Evans, outside Liverpool Civil and Family Court during a hearing related to their dispute with medics looking after their son at Alder Hey Children's Hospital. (Photo: Peter Byrne/PA Images/Getty Images)

After doctors in Britain’s single-payer health system recommended that a mentally disabled woman undergo an abortion, a judge ordered the woman—an unidentified Roman Catholic—to have an abortion against her will.

In her June 21 decision, Justice Nathalie Lieven—a judge in Britain’s Court of Protection, a panel that handles cases involving the mentally disabled—declared, “I have to operate in her best interests, not on society’s view of termination.”

The case was quickly appealed —and, happily, quickly overturned.

The three-judge panel has yet to issue its reasoning in the case, but its rationale cannot come too soon. In the meantime, the facts of the case are instructive.

The New York Times reports that the woman, of Nigerian descent, has been diagnosed with a “‘moderately severe’ learning disorder and a mood disorder.” There was, according to the Times report, no evidence that the unborn 22-week-old fetus was “impaired.”

In short, the proposed compulsory abortion was to be the late-term destruction of a healthy child.

The woman’s close family ties and pledges of support were blithely dismissed. This abortion was not only opposed by the woman, but also by the woman’s mother, the child’s grandmother, and a midwife, who stated that she would look after the child.

Lieven decided, however, that the dual task of looking after both her daughter and her grandchild would be too much for the grandmother. In effect, the judge determined that a compulsory abortion was the preferable course of action, better even than the child’s potential adoption.

Sir Edward Leigh, a British member of Parliament, denounced Lieven’s decision to impose mandatory abortion as a practice characteristic of China’s communist regime. “The government should take urgent action to ensure this barbaric practice is eliminated from this country and from all countries,” he said.

Meanwhile, Sen. Marco Rubio, R-Fla., asked Trump administration officials to intervene and offer a safe haven and alternative care for the mother and child in the United States.

This British controversy is, however, emblematic of a recurrent and even more troubling problem; namely, the episodic British assertion of statist supremacy and the usurpation of the fundamental rights of individuals and families in the provision of health care.

The most recent—and most graphic—example was the 2018 case of toddler Alfie Evans and his parents, Tom Evans and Kate James.

British medical authorities, backed by the courts, determined that Alfie’s medical condition (a neurodegenerative disorder) was terminal, and declared that they, and not the parents, had the right to determine the child’s “best interests”—in this case, to die a “dignified” death.

In the course of the process, British officials denied the right of the parents to seek alternative medical care, including travel to an Italian hospital, to preserve and protect the life of their child.

The parents’ right to try for a different outcome, even if highly doubtful, was denied. Millions around the globe were shocked by the case.

The case went to Britain’s Supreme Court. In an April 20, 2018, four-page decision in the case, the three-judge panel of the Supreme Court of the United Kingdom ruled, “It is therefore clear law that the parents do not have the right to use the writ of habeas corpus to acquire the custody of their child if this will not be in his best interests.

“The decisions of the trial Judge clearly amount to decisions that the parents have no right to direct Alfie’s future medical treatment.”

In the final paragraph of their decision, the judges ruled, “The hospital must be free to do what has been determined to be in Alfie’s best interests. That is the law in this country.”

The high-profile British cases of care denials, as well as this latest case of coercive abortion, highlight the key issue in modern health policy: Who is going to make the key decisions in health care, including the most difficult decisions over life and death?

Perhaps no one has framed the alternatives better than professor Paul Krugman of the City University of New York, a champion of an American version of a “single-payer” health care system.

Writing in The New York Times, Krugman declared: “For decades, we’ve been lectured on the evils of big government and the glories of the private sector. Yet health reform is a job for the public sector, which already pays most of the bills directly or indirectly, and sooner or later will have to make the key decisions about medical treatment.”

Krugman added, “Moreover, it’s neither fair nor realistic to expect ordinary citizens to have enough medical expertise to make life-or-death decisions about their own treatment.”

Krugman’s statist approach—the transfer of “key” decisions in health care to “the public sector”—is now embraced by almost half of the Democrats in the House of Representatives and leading Democratic senators.

House and Senate versions of so-called “Medicare for All” legislation would not only abolish the existing Medicare program, but also outlaw any private or job-based coverage and restrict private consultations with physicians for services outside of the government system.

Federal officials would henceforth determine what health benefits and medical services Americans would or wouldn’t have access to in the new national program. Taxpayer funding of abortion, however, would be mandatory.

In the new dispensation, your “best interests” could be a problem. If government officials know best what’s good for you, they presume, you then have no need for health care alternatives. Government officials, well-schooled in “progressive” ethics, will take “good” care of you. Yeah, right.