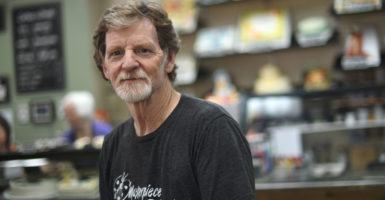 Jack Phillips, owner of Masterpiece Cakeshop in Lakewood, Colorado, is being sued again, this time for not baking a “birthday cake” to celebrate the gender transition of a transgender woman. (Photo: Hyoung Chang/Getty Images)

A Colorado baker is being sued for a third time for refusing to design custom cakes that he says run contrary to his religious beliefs.

Jack Phillips, the owner of Masterpiece Cakeshop in Lakewood, Colorado—first sued in 2012 for declining to create a custom cake for a same-sex wedding because of his traditional Christian beliefs—is being sued again, this time for not baking a “birthday cake” to celebrate the gender transition of Autumn Scardina, who now identifies as a transgender woman, according to The Christian Post.

In June 2018, the U.S. Supreme Court ruled in favor of Phillips 7-2, holding that the Colorado Commission of Civil Rights—which had ruled that Phillips had discriminated unlawfully—demonstrated “clear and impermissible hostility” toward Phillips and his Christian belief that marriage is the union of one man and one woman, as The Daily Signal previously reported.

After Phillips’ Supreme Court win, he was sued a second time by the state, this time on Scardina’s behalf, but the suit was dropped when Phillips countersued.

The latest lawsuit was filed June 5 in Denver District Court, again by Scardina, according to KCNC-TV in Denver.

Jim Campbell, senior counsel with the Alliance Defending Freedom, who has represented Phillips in the prior cases, said in a statement provided to The Daily Signal that he doesn’t think the latest lawsuit against Phillips will be any more successful in court.

“A new lawsuit has been filed against Masterpiece Cakeshop that appears to largely rehash old claims,” Campbell said, adding:

The state of Colorado abandoned similar ones just a few months ago. So, this latest attack by Scardina looks like yet another desperate attempt to harass cake artist Jack Phillips.

And it stumbles over the one detail that matters most: Jack serves everyone; he just cannot express all messages through his custom cakes.

This time, Scardina is being represented by lawyers Paula Greisen and John McHugh.

Greisen said their client is suing because “the dignity of all citizens in our state needs to be honored.”

“Masterpiece Cakeshop said before the Supreme Court they would serve any baked good to members of the LGBTQ community,” Greisen added. “It was just the religious significance of it being a wedding cake. We don’t believe they’ve been honest with the public.”