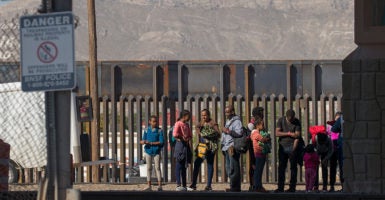 Migrants wait to be processed and loaded into a van by U.S. Border Patrol agents after being detained when they crossed illegally into the United States from Mexico on June 5, 2019, in El Paso, Texas. (Photo: Joe Raedle/Staff/Getty Images)

Around 200 Mexican law enforcement officials blocked a U.S.-bound caravan Wednesday. The caravan, made up of about 1,000 Central American migrants, was heading north on a highway near the town of Metapa. Mexican police and immigration agents even went so far as to wrestle some of the migrants to the ground when they refused to comply.

The incident was the latest in Mexico’s recent efforts to crack down on illegal immigration.

The first annual U.S.-Mexico Anti-Transnational Criminal Organization and Border Violence Prevention Initiative was launched Tuesday. The program aims to increase cooperation between the two countries regarding immigration and crime enforcement. U.S. officials have already begun training Mexican agents on how to better police their shared border.

Mexican cooperation and enforcement follows Trump’s announcement in late May that he would slap Mexico with incremental tariffs until its government does more to stop illegal immigration, the most intense pressure he’s applied to the country since the beginning of his administration.

Detentions and deportations have increased since Mexico President Andres Manuel Lopez Obrador assumed office, and his administration has implemented a policy, known as “Wait in Mexico,” that keeps some Central American asylum-seekers in his country while they apply for U.S. asylum. However, Trump says his southern neighbor must do more.

Under the guidelines of Trump’s plan, the White House would impose a 5% tax on all Mexican imports beginning June 10. This tax would increase by 5% each month, reaching a possible maximum of 25% by October.

The tariffs, he said, would be stricken if Mexico demonstrates that it’s doing more to prevent illegal migration into the U.S.—the reason being that most illegal aliens cross Mexico in their journey to the U.S. border.

“Should Mexico choose not to cooperate on reducing unlawful migration, the sustained imposition of tariffs will produce a massive return of jobs back to American cities and towns,” the president said of the plan’s effects.

A top Mexican delegation is negotiating with American officials, including Vice President Mike Pence and Secretary of State Mike Pompeo, in Washington, D.C., as the two sides attempt to reach a consensus before the June 10 deadline. While Mexico’s foreign minister, Marcelo Ebrard, said publicly that he believes a deal will be made in time, his government has vowed to retaliate if Trump moves forward with tariffs.