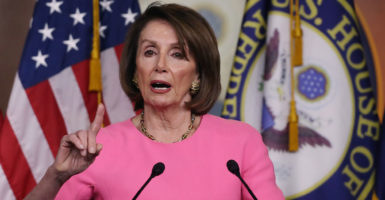 Speaker Nancy Pelosi had hoped the House would pass a disaster aid bill last week without being in session. She got the job done Monday night. (Photo: Mark Wilson / Staff/Getty Images)

A  $19.1 billion disaster aid bill that faced significant opposition from conservative Republicans passed the House on Monday evening by a lopsided vote of 354-58.

Only Republicans voted against the measure, which includes funding in the aftermath of hurricanes, wildfires, and other storms as well as money to help Puerto Rico rebuild from hurricane damage in 2017.

President Donald Trump is expected to sign the spending bill.

House Majority Leader Steny Hoyer of Maryland, the House’s No. 2 Democrat, tweeted Monday night that he hoped Trump would “sign it swiftly into law.”

Here are three things to know about the bill, which amounts to more than four times what Trump previously requested to construct a wall or other barriers at the southern border.

“If the speaker of this House thought that this was must-pass legislation, the speaker … should have called a vote on this bill before sending every member of Congress on recess for 10 days,” Massie said of House Speaker Nancy Pelosi when he blocked the measure Tuesday.

The Senate already had passed the spending bill. Since the House was on recess last week, a single lawmaker could object to prevent passage by unanimous consent rather than a recorded vote.

“You can’t have bills passed in Congress with nobody voting on them,” Massie said. “That is the definition of the swamp, and that’s what people resent about this place.”

The move by the three Republicans was met with criticism from some in their own party as well as Democrats, with Rep. Sanford Bishop, D-Ga., saying that “many will not be able to plant this year” if the disaster aid package did not go through.

Roy had objected to the bill on May 24, blocking passage, as had Rose on Thursday.

Roy said on Twitter: “Congress should not attempt to pass major spending bills when members of Congress aren’t even in Washington, D.C., to debate and vote on said bills, especially when that bill provides no funding to address the humanitarian crisis on our border.”

The bill includes funding for block grants sponsored by the Department of Housing and Urban Development, Justin Bogie, a senior policy analyst in fiscal affairs at The Heritage Foundation, told The Daily Signal in an email that

“Something that we have consistently been critical of in these bills is funding for the Community Development Block Grant,” Bogie, who works in Heritage’s Grover M. Hermann Center for the Federal Budget, said.

“This bill has another $2.4 billion for it,” he said. ”We have called for this grant to be eliminated in [Heritage’s] “Blueprint for Balance,” as it is poorly targeted and there is little evidence that it is effective.”

“Payouts from these grants have also been notoriously slow, meaning that it’s hard to make the argument they are appropriate ‘emergency’ response,” Bogie said..

“This is not a trivial bill, this is unbudgeted, this is nowhere in the budget,” Massie said. “I think any time Congress spends any amount of money, certainly more than let’s say a million dollars, there should be a recorded vote.”

The legislation does not include funding for a wall or other barrier along portions of the southern border, which Trump has requested for months.

Senate Appropriations Chairman Richard Shelby, R-Ala., said that wall funding was not a top priority for the legislation.

“The president said OK,” Shelby said, according to NPR. “I’m sure he wanted the border [wall funding] but we took that all out and we’re going to try to push that separately.”

This article has been corrected to reflect when Roy blocked the legislation.