US-Iran Standoff Is No Cause for Alarm 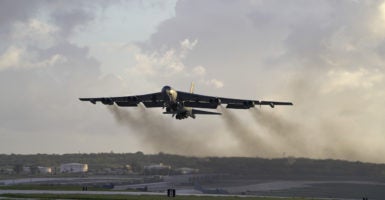 Still, there’s plenty to unpack and learn from the latest round of unsettling news from the Middle East.

One reason for the war talk is that Iran is threatening to stop complying with the Iran nuclear deal, the agreement negotiated by the Obama administration in 2015 to curtail Tehran’s nuclear program.

Critics were apoplectic when President Donald Trump withdrew from that deal. Iran’s announcement last week got them worked up all over again. They had convinced themselves that it was either the Iran deal or war. Now, they just assume there will be war.

But in their anger, they forgot that their support for the Iran deal was largely based on myths. Iran never stopped its destabilizing activity in the region after signing the agreement. The deal never improved prospects for better relations between Washington and Tehran.

Still, some expressed concern over new reports of a muscular U.S. military deployment to the region, which was provoked by intelligence of an impending Iranian covert action. Those concerns made no sense. The U.S. move was intended to pre-empt escalation, not prompt it.

Finally, this week we saw reports of attacks or sabotage against Saudi tankers and pipelines in the Persian Gulf. The facts on this latest provocation are still in short supply. Some claim that Iran-backed Houthi rebels in Yemen may be behind these malicious acts.

Still, there are many rungs in the ladder of escalation between what’s happening now and war—and there are no signs either side is really interested in climbing much higher.

From the U.S. perspective, the campaign to isolate and pressure the Iranian regime seems by and large to be working. Tehran is increasingly short on cash, faces serious internal dissent, and has little international support.

From Tehran’s perspective, this is an inopportune time for a showdown with Washington. They would rather wait Trump out and hope to get a more pliant next president.

Still, it does serve their interest to stir the pot of troubles, hoping to fuel a backlash against Trump that might help oust him from office. But they can’t press too hard. Unseating Trump isn’t worth provoking a war with the United States.

What Tehran doesn’t get is that if anything, Americans are likely to appreciate Trump being tougher on Iran. Americans know Trump didn’t start these troubles. Tehran did.

In 1978, Ayatollah Khomeini made America his enemy. During that same year, Trump was a 32-year-old real estate developer in New York City. Secretary of State Mike Pompeo was in high school. They didn’t start this dust-up.

Seven American presidents before Trump have had to deal with Iran’s malicious meddling in the Middle East. Trump inherited this problem—he didn’t create it.

What this latest incident shows is that Trump is perhaps the first president to commit to dealing with the Iranian regime in a sustained and serious way. He is pressuring them until they stop messing with America’s vital interests, and showing the willingness and resolve to do that for the long term, if that’s what it takes.